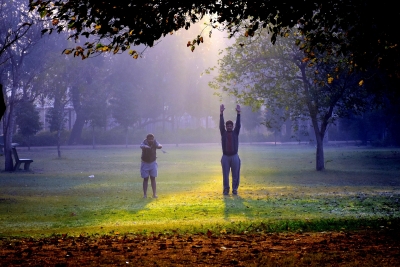 The study, published in the journal Neurology, showed the relationship between exercise and the metabolism of glucose in the brain was not affected by insulin or BMI levels.

Reduced glucose metabolism in the brain can be seen in people with dementia.

“These results may help us to understand how physical activity affects brain health, which may guide us in developing strategies to prevent or delay age-related decline in memory and thinking skills,” said Geraldine Poisnel, from Inserm Research Center in Caen, France.

The study involved 134 people with an average age of 69 who had no memory problems. The people filled out surveys about their physical activity over the past year. They had brain scans to measure volume and glucose metabolism. Information was gathered on BMI and insulin levels as well as cholesterol, blood pressure and other factors.

When researchers looked only at areas of the brain affected by Alzheimer’s disease, they found the same results.

Those with the most activity also had a higher average rate of glucose metabolism in the brain than those with the least amount of activity.

Higher physical activity was not associated with how much amyloid plaque – a marker for Alzheimer’s disease – people had in their brains.

Poisnel said more research is needed to understand the mechanisms behind these relationships.