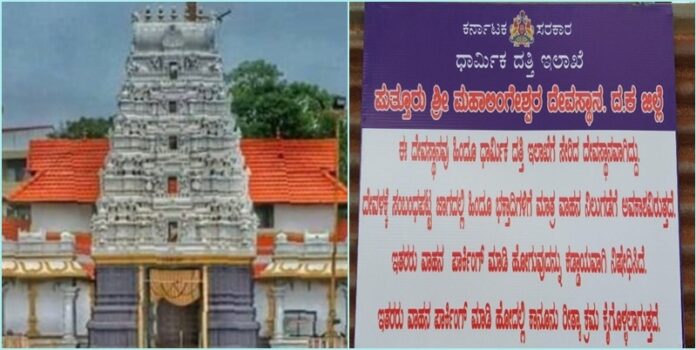 Those not belonging to the Hindu religion are not allowed to park their vehicles in the Devamaru Gadde area which lies in front of the temple, as per a signboard set up by the management. It warns that legal action will be taken against those who violate the guidelines.

As the step by the temple authorities was termed a sign of intolerance, temple management President Maliya Keshava Prasad sought to clarify that if people from other religions parked their vehicles in the land belonging to the temple, “it caused trouble for Hindu devotees who visited the temple”.

“Many devotees have complained about it. The signboard has been installed for the convenience of Hindu devotees. It is also a precautionary measure to avoid untoward incidents. The Bajarang Dal, and Hindu Jagaran Vedike activists have filed complaints. We have also received individual complaints,” he said.

“They (non-Hindus) used to overspeed in the Chariot lane near the temple. People used to sit in the parked cars causing inconvenience to Hindu devotees. We are planning to erect a wall around the temple to avoid the problem,” he claimed.

Talking to IANS, Dakshina Kannada’s Superintendent of Police, Sonawane Rishikesh, said that the temple comes under the Religious and Charitable Endowments Department and they will initiate action according to procedure.

The police is not aware of the development and has not initiated any action, he said.

“So far, the Police Department has received no complaint in this regard. We will definitely look into it and inquire if it is required,” he added.

Meanwhile, sources said that the district administration has issued a notice to the temple management in this regard and is inquiring into the matter. (IANS)