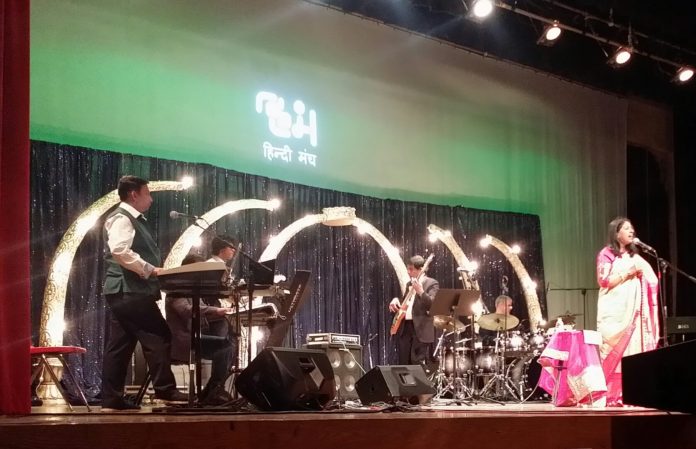 BURLINGTON, MA–Hindi Manch, a Boston-based non-profit organization which conducts singing competition for various age groups, held this year’s competition during its National Hindi Convention, and announced the winners Saturday night. Bollywood singer Kavita Krishnamurthy gave out the awards to the winners after her own dazzling performance at the Burlington High School auditorium.

Here are the winners in each solo category:

Here are the winners in the duet category:

Harish Dang, a patron and promoter of music, said such programs are valuable and necessary to discover singers in the community.

“It is good to see the young people being discovered and Hindi Manch bringing them out,” said Mr. Dang. “It was a great show by Preetesh (Shrivatava) to bring out such talents and have a show like this.”

Mr. Shrivastava is president of New England Hindi Manch, which is currently hosting a 3-day National Hindi Convention in Boston to celebrate its 10th anniversary. The mission of Hindi Manch is to bring together people who know Hindi or who want to know Hindi and propagate the language and culture in the future generations.