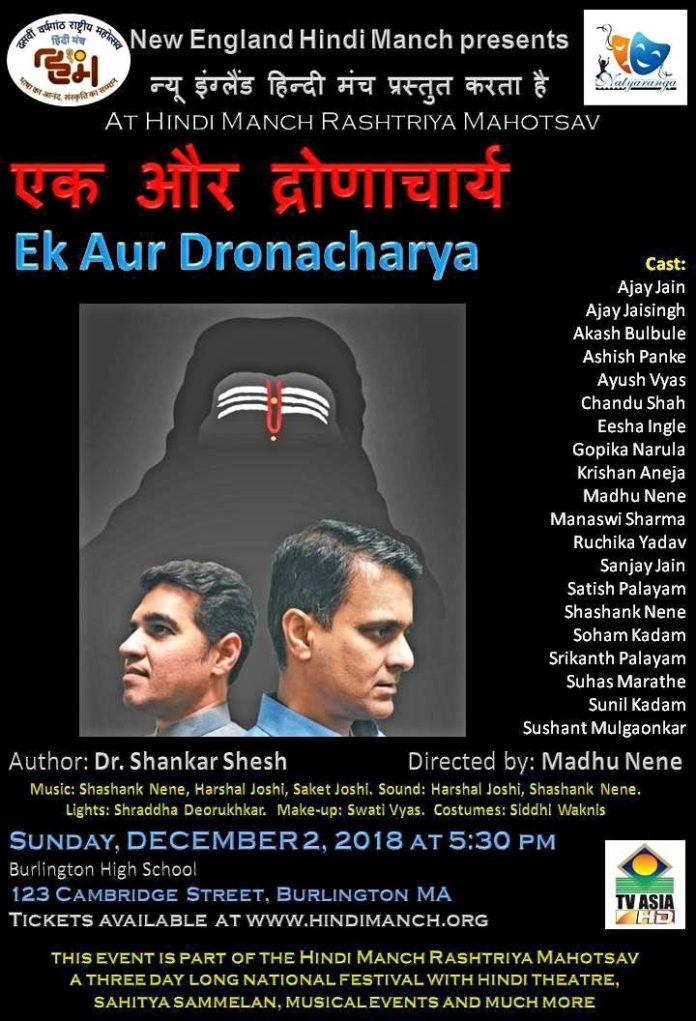 Natak has been the best form of storytelling since ancient times. I like to think of theater as 3D entertainment that has been around for thousands of years. Not only is it a powerful tool but also a pretty entertaining and enlightening one.

Natak has also been an integral part of Hindi Manch since its inception 10 years ago. Over a dozen plays have been staged in the last 10 years of Hindi Manch. Continuing the tradition, and magnifying the fun for “Hindi Manch Rashtriya Mahotsav (HMRM)” or National Hindi Convention, multiple nataks/plays will be showcased at the Rasthriya Mahotsav. If you want a little drama, or a lot of drama, the HMRM is the place to go.

Over the course of two days, 5 different Hindi plays will be staged. They promise to deliver something for everyone. There will be a dose of laughter, reality, satire, surprise, struggles, and some dilemmas.

One thing common across the board will be lots of amusement and talent. This is one of a kind opportunity for you to experience the indescribable energy of live theater where you can just be in the moment for that period of time. Keep reading if you want to know more about the various plays, the groups that are bringing them and the schedule. 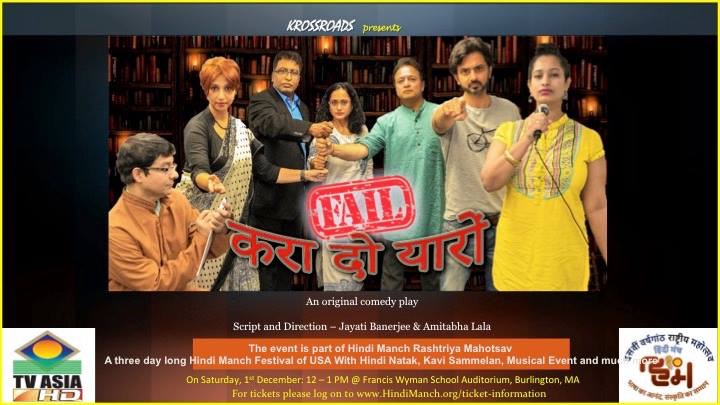 It is an original play written by Jayati Banerjee and directed by Amitabh Lala, production of ‘Krossroads’- a contemporary theater group In the Boston area that thrives in multilingual original plays. The play is a comedy mixed with shades of satire. It’s a story of a dejected middle-aged man; who despite having a degree in education finds himself struggling to match up with the system and overall finding himself unsuccessful in life. He blames his college and the professors for his poor lifestyle. He walks up to his college principal declaring that he is a failure in life because of the education he has received, and thus demands a refund for his tuition. The man forces the perplexed professors to reexamine him for all the subjects – where he is determined to ‘fail’ the exams, thereby proving his point. Will the professors succumb to his demand? Or will the man return empty handed? A hilarious drama unfolds as both sides get ready to face-off each other to prove their own viewpoint, be it right or wrong. 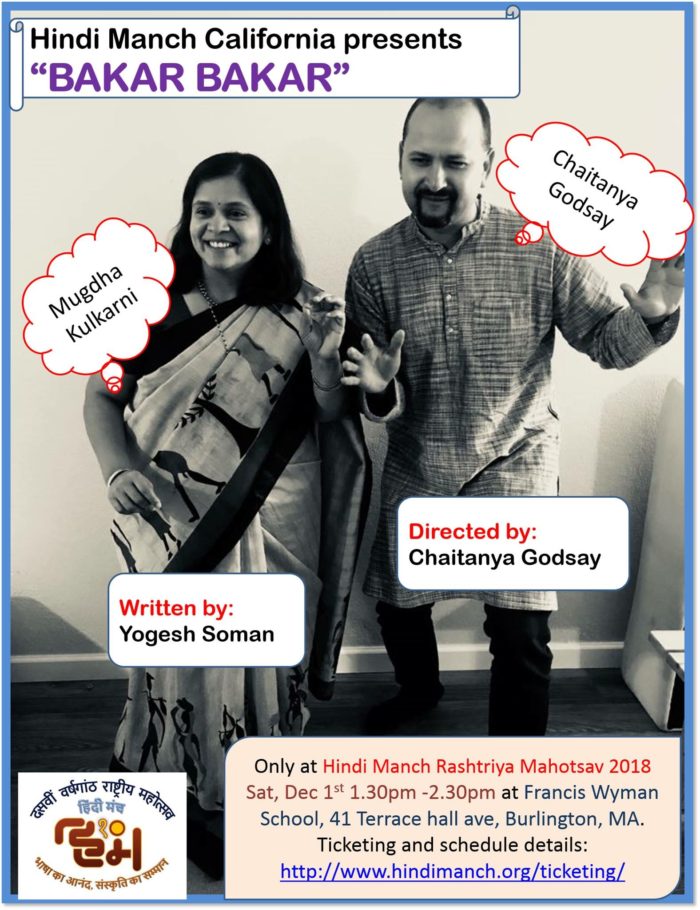 A Marathi original play Gappa written by Yogesh Soman, translated into Hindi as “Bakar Bakar”, directed by Chaitanya Godsay. It is being brought to the HMRM by Hindi Manch California. The story revolves around a middle aged couple that starts talking about things they want to do in life, and things keep taking an unexpected turn every time they talk about it. Come see what turn of events happen and are they as per the couple’s expectations for life in this comedy play. 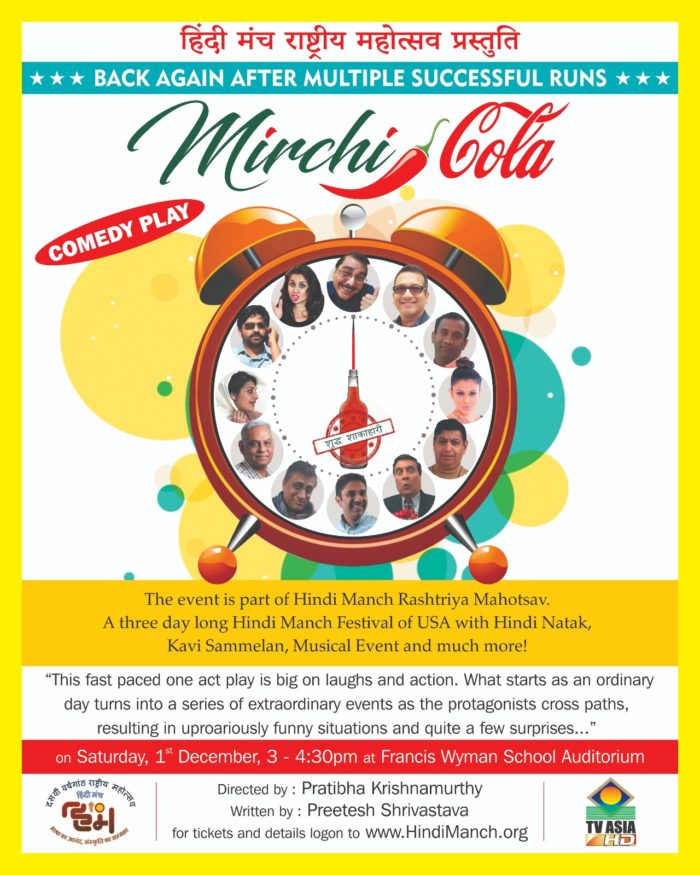 An original script by none other than Preetesh Shrivastava, directed by Pratibha Krishnamurthy and brought to you by your own Boston’s Hindi Manch. Mirchi Cola is a fast-paced one-act play that is particularly big on laughs and action. What starts as an ordinary day turns into a series of extraordinary events as the protagonists cross paths, resulting in uproariously funny situations and quite a few surprises. A true laughter riot that will leave you amazed, amused and laughing on the floor at the same time! Characters are woven so well that you will simply fall in love with them. Come see what the hoopla is about Mirchi Cola, which has been staged few times in the past and is back on public demand, with a new cast now. 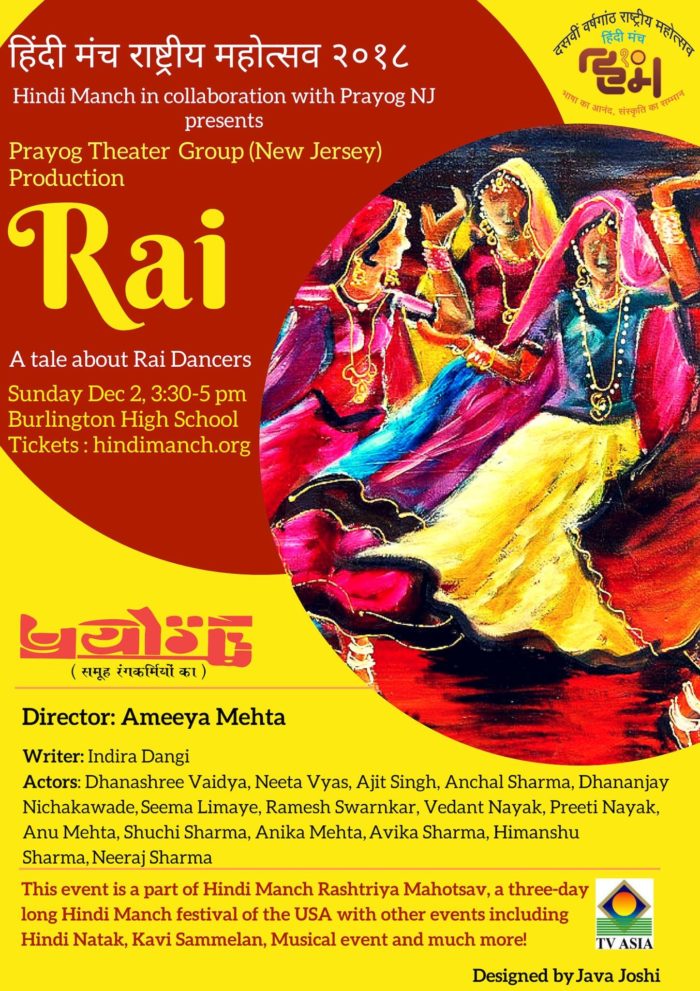 Brought to you by the Prayog Theater Group USA, based in New Jersey. Prayog USA is a child of Prayog theater group from India, which was incepted in 1976. Prayog USA has staged over 35 shows so far since its formation in 2012. Rai, written by Indira Dangi and directed by Ameeya Mehta gets its name from a popular folk dance form in Bundelkhand. Rai is a dance form evolved over the centuries, by the dancers, who were assigned to the temples and committed for life in the prayer of God, very much on similar lines as ‘Devdaasi’ tradition in South India. But over the years, ‘Rai’ dancers were exploited, by the higher strata of society. Not only their situation deteriorated over the years, but ‘Rai’ dance form also got a bad name. This play is about the life, struggle and aspirations of ‘Rai’ dancers. Don’t miss this opportunity to see how ‘Prayog’ throws light on this social issue through the medium of natak. 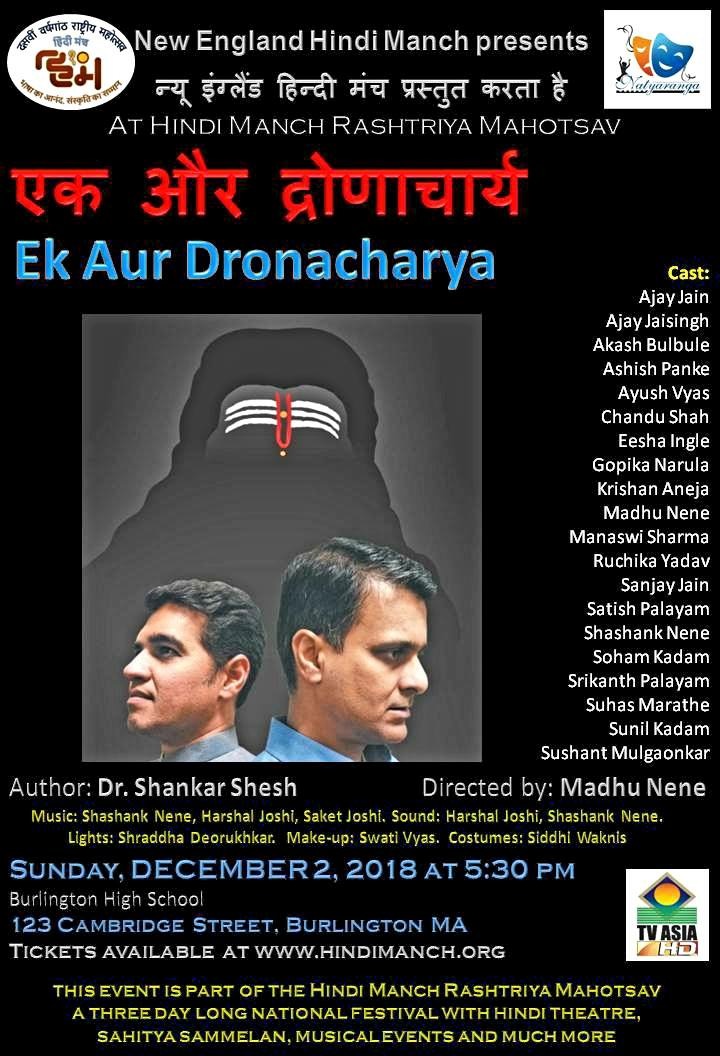 Contact Hindi Manch info@hindimanch.org for any questions regarding the festival.