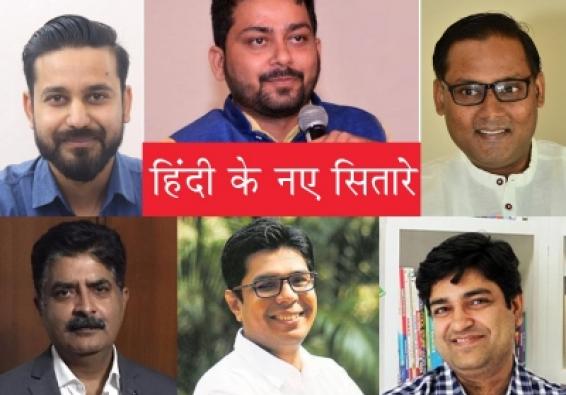 Lucknow–Hindi is undergoing a transition with the changing times. Hindi is the third most spoken language in the world but has lost its sheen due to the extent to which English has been promoted in the last few years. The use of difficult words in Hindi books has made the language complex.

However, the situation is changing and young writers have started writing stories in simple Hindi, which has greatly expanded the readership of the language.

As publishers have also given preference to young writers, a new picture has emerged. Within a few months, the books of these authors have became best-sellers. Not only this, it has also put forth a clean image among the readers. Just as readers are eager to meet the English writers and click photographs with them, there is a craze for the new breed of Hindi writers among the readers. These new faces are the pride of every literary festival today.

Apart from writers, publishers too have endeavoured to take Hindi to newer heights. Rajkamal Publication, Rajpal Publication, Vaani Publication, Hind Pocket Books, Hind Ugham and Redgrab books have targeted the youth, which has proved to be a milestone for the promotion of the language. Moreover, these publishers have published quality Hindi books, similar to that of English books.

Hindi has started off on a new path, though this is just the beginning. The long haul still remains. New authors on the block also pay attention to their looks and sales along with writing, and also promote their books to the fullest. On the occasion of Hindi Day, we are telling you about such authors and their literary works.

Young writer Kuldeep Raghav writes romance and love stories. With books like ‘I Love You’ and ‘Ishq Mubarak’, he has cemented his place in the hearts of the young readers. His books have been instantly picked up by youths, making him a “best-seller” on Amazon. Interestingly, the Uttar Pradesh government has decided to confer him with ‘Hindustani Akadami Yuva Lekhan’ award.

Writer Bhagwant Anmol, who has been awarded the Balakrishna Sharma ‘Naveen’ award 2017 by the Uttar Pradesh Hindi Sansthan, is also known for his different style of writing. His books ‘Zindagi 50-50’ and ‘Bali Umar’ are quite well-known. The best-selling writer Bhagwant in ‘Bali Umar’ brought out childhood memories in full display and the book wormed its way into the hearts of readers.

There are a dozen writers who are working diligently to take the Hindi literature towards its golden age. Another writer Satya Vyas, in his book ‘1984’, left an imprint in the readers’ minds, which talks about a love story during the anti-Sikh riots in India. The hero of the book, Rishi, himself turns a rioter while saving his lover’s family from miscreants.

Similarly, novels like Divya Prakash Dubey’s ‘Musafir Kaif’ and ‘October Junction’ were appreciated by readers all over the country. His recently released book ‘Ibnebatuti’ has also earned praise from the readers. The crime-based book ‘Naina’ by Sanjeev Paliwal can be discribed as a good example of ‘simple language and interesting content’.