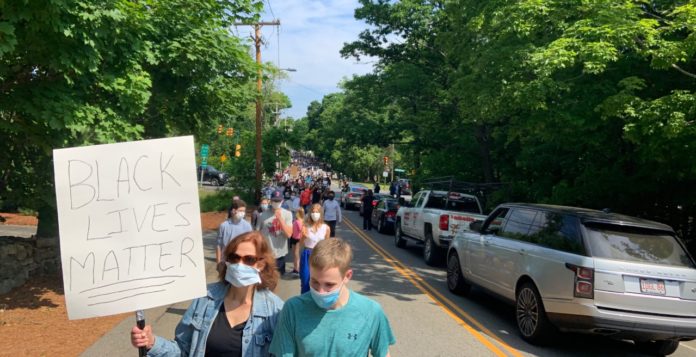 WESTON, MA—Two Weston High School students on Wednesday organized a peaceful march that was attended by hundreds of Weston residents, including Weston police, in solidarity against racism and the brutal murder of African-American George Floyd in Minneapolis last month.

The peaceful protest against police brutality was organized by two Weston High School students, Bella Simmons and Alton Jenkins. Expecting roughly 150-200 people, an estimated 300 people came together in the small Massachusetts town to show their support for the Black Lives Matter movement.

The local police department even showed their support by walking alongside protestors and closing off the roads. It was certainly a sight to see as the affluent and privileged community band together to demand justice and reform.

Radhika Mishra, a classmate of Jenkins, opened the march with a speech in response to comments made by fellow residents on the town’s community page.

While mentioning the constancy of cases like Floyds, she called out her own town for turning a blind eye and the lack of progressive discussion prior to the march.

“Our community only talks about this when it is prevalent to us and in our backyard. Yet black voices have been telling us this is a constant reality. We heard. But we never listened,” said Ms. Mishra. “What happened to the city (Boston) is not destruction. It is the result of years and years of suppressed injustice. So quick talk about the violence and the looting but never once mention the eight hours of peaceful protests. People are so quick to defend the “good cops” and the Boston PD (Police Department). But never once mention the fact that they went in with tear gas and rubber bullets first and they receive paychecks from a system that has racism in its core.”

Ms. Mishra urged people to “empathize with a community that is constantly disenfranchised by society.”

“To George Floyd, whose name is not just another ‘trending twitter hashtag,’ but instead a spark to a new age of movement, peaceful protest, and revolution,” said Ms. Mishra.

As protestors regrouped after completing the route, Mr. Jenkins closed march with a call to action.

“We are frustrated, exhausted and tired of being tired,” said Mr. Jenkins. “Allow me to be very clear. This fight is not about one life. It is not to pin blacks and whites and other races against each other. We don’t want each other to pick sides. This is about a deeply rooted system of racism.”

He went on to say, “this is going to require a lot of effort from you, and if the thought of taking action makes you nervous or uneasy, that’s good. There are a lot of people who don’t feel safe in this world. Their rights have been in valued and that’s not fair to them.”

During his speech, Mr. Jenkins urged people to “go to the root of the problem because dealing with the condition is not enough. Silence in all forms is the oxygen of all pain. Hate feeds off silence. Use your voice.”