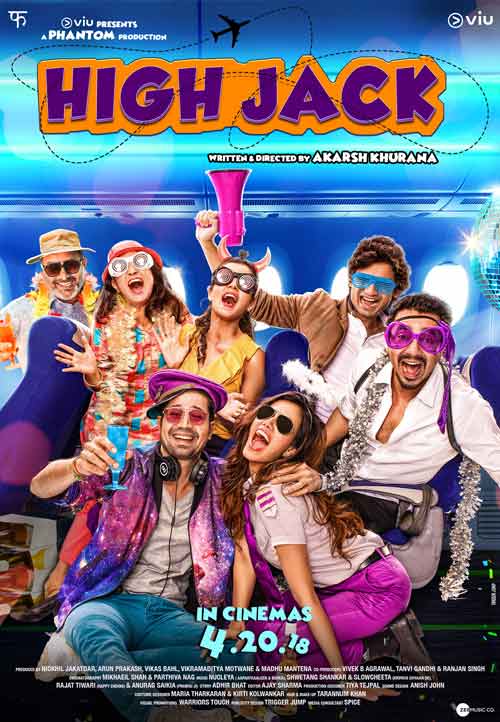 High on substance abuse and low on content, that is how one would describe this “stoner” comedy – ‘High Jack’, directed by Akarsh Khurana.

With this film, the credibility of its producers – Phantom films co-founded by Anurag Kashyap, Vikramaditya Motwane, Madhu Mantena and Vikas Bahl, is definitely at stake! The company was formed to promote meaningful cinema. One needs to find a meaning here!

This loud, dull-witted comedy begins to grind on the audience from the very beginning because it was depending on its sad and pathetically unfunny characters rather than the funny logic for its laughs.

The writing as well as the direction is purely slapdash, too mundane and far-fetched to digest. The title puns on the term hijack and literally ensures that much of the action takes place on the Udaan Air flight number QY75T from Goa to Delhi.

The said fight is hijacked to Kochi by some disgruntled employees of the airline. How Rakesh an out-of-luck DJ who was recently duped in Goa along with some inconsequential but quirky co-passengers and the flight crew endure the journey, forms the crux of the tale.

Being a comedy – obviously the seriousness of the subject is not taken into consideration and thus the plot meanders with gags and action that has no depth. Among the quirky passengers are a crying infant, an androgynous airhostess who doubles up as a Black Cat Commando, a disgraced cricketer, an inquisitive author and a bored-of-themselves couple.

The film has a happy ending and the finale song irritatingly reinforces it with its lyrics.

The performances of every character is perfunctory. The hijackers are dumb, emotional and ill-equipped to carry out the task. Their inter-actions and idiosyncrasies seem to be bankrupt of humour thus plunging the film to its nadir.

Leading the team of hijackers is Mantra Mugdh as Vinit, who is accompanied by Sarthak Kakar as Nakul, Sarang Sathaye as Dheeraj and the character Ty.

Sumeet Vyas gives a fair show as DJ Rakesh who is doped throughout the film. He is abused and irritated by co-passengers on either side, but he does nothing to elevate and make his character memorable.

Kumud Mishra and Natasha Rastogi as Mr. and Mrs. Taneja are natural and interesting and they hold your attention for a while.