(Editor’s note: Given the role of yogurt in the Indian diet, especially among vegetarians, we are publishing an article on yogurt’s health benefits from The Nutrition Source, a publication of Harvard T.H. Chan School of Public Health. The article also includes footnote and references in case our readers want to read more about this topic.)

Yogurt is a staple food in several cultures, originating from countries in Western Asia and the Middle East. The word yogurt is believed to be derived from the Turkish word “yoğurmak,” which means to thicken, coagulate, or curdle. [1] Historical accounts describe nomadic herdsmen carrying milk in pouches made of animal skins. Naturally occurring enzymes in the pouches that were carried close to the body produced enough body heat to ferment the milk, producing an edible food that lasted longer than milk; thus the introduction of yogurt!

Yogurt is made when heated milk is combined with bacteria, specifically Lactobacillus bulgaricus and Streptococcus thermophilus, and left to sit for several hours at a warm temperature (110-115°F). Additional types of lactobacilli and bifidobacteria may be added. The bacteria convert the sugar in milk, called lactose, to lactic acid, which thickens the milk and develops its distinctive tart flavor. 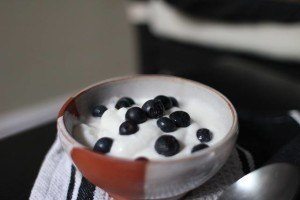 References to yogurt and health date back to 6000 BCE, as seen in Indian Ayurvedic medicinal texts. In the 1900s, the Bulgarian microbiologist Stamen Grigorov discovered Lactobacillus bulgaricus bacillus, a strain of the bacillus bacteria not naturally found in the human gut that caused the fermentation of yogurt. He also researched the specific health effects of lactic acid.

Today, yogurt can be found in a variety of forms—including plain, but often with added fruit or sweeteners. Thickeners and stabilizers such as gelatin and pectins may also be added for a thicker texture and richer taste.

Individuals with lactose intolerance who cannot tolerate dairy products may be able to eat some yogurt because of its lower concentration of lactose. Fermentation by the bacteria breaks down lactose to lactic acid. Another option may be plant-based yogurts, which do not contain lactose.

Animal-based Yogurt: Yogurt made from the milk of animals, such as cows, goats, sheep, camels, and buffalo.Plant-based or non-dairy yogurt: Yogurt made from soy, coconut, nuts, rice or other plant foods. Note that not all plant-based yogurts undergo fermentation so they may not contain live bacteria. Plant-based yogurts may be lower in protein, calcium, and other nutrients unless they are fortified, so check the Nutrition Facts label if these nutrients are important in your diet.

Probiotic: Refers to foods, beverages, and supplements containing specific strains of live bacteria or microbiota. Food manufacturers may add additional probiotic strains for perceived health benefits. However, the exact amount of probiotics and strain of bacteria that yield a beneficial health effect will vary among individuals and is not well-researched.

CFUs or colony forming units: The number of living bacteria per gram. This is an indication of how many live bacteria are present in the yogurt at the time of manufacture. Yogurt typically contains at least 1,000,000, or 106 CFUs, which is the minimum needed to display a “Live and Active Cultures” seal on the packaging. This minimum number is the standard provided because it is expected that some bacteria will be destroyed when passing through the digestive tract and exposed to stomach acid. Though food manufacturers often promote the health benefits of multiple strains of bacteria and a high amount of CFUs, with some products offering billions of CFUs, research does not support these claims.

Yogurt offers several important nutrients including protein and calcium. However, much of the research on yogurt’s health benefits centers on its live bacterial content, which is also present in other fermented foods like kefir, kimchi, and sauerkraut. [2] It has been proposed that a lower number of some bacterial strains in the body may influence risk of certain disease conditions including obesity, type 2 diabetes, irritable bowel syndrome, and chronic inflammatory diseases such as Crohn’s disease, ulcerative colitis, and rheumatoid arthritis. [3, 4] A plant-based diet is associated with supporting a diverse and probably healthier gut microbiota more than a diet low in fruits and vegetables and high in meat, [5] and yogurt consumption may also help to increase microbiota diversity in the gut. [6] Learn more about the body’s microbiome.

Epidemiological research on specific health effects of yogurt is still limited but a few studies suggest a benefit. In a study following three large cohorts for up to 20 years that included 120,877 men and women free of obesity and chronic diseases at baseline, yogurt consumption appeared to protect from weight gain. [7] The authors suggested that changes in colonic bacteria from eating the yogurt may have influenced weight changes. Daily yogurt intake may also protect against heart disease and type 2 diabetes. [8-10]

If you want to try making strained yogurt at home, it’s not as difficult as you might think: