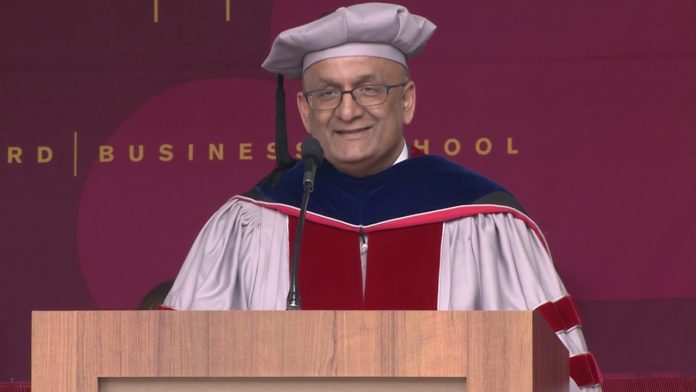 BOSTON—Harvard Business School held its 109th Commencement exercises on Thursday with a diploma ceremony on its campus in Boston. HBS Dean Nitin Nohria spoke about the role of inspiration, integrity, and impact.

After an all-University celebration in Harvard’s Tercentenary Theatre, 935 students received their MBA degrees in front of the School’s Baker Library | Bloomberg Center.

The top five percent of the MBA Class of 2019 (50 students) graduated with high distinction as Baker Scholars (named after the School’s initial benefactor, George Fisher Baker). 75 earned their diplomas with distinction. 186 earned second-year honors. 7 MBA degrees were awarded this past March.

In his Commencement remarks, Mr. Nohria spoke about the role of inspiration, integrity, and impact.

“As we anticipate the lives you will lead when you depart this campus, I can only hope your time here has had a transformative impact on you and that you leave feeling ready to have an equally transformative impact on others,” he said. “Whichever path you choose, we hope you will work every day in a manner that inspires others. Help restore society’s trust in business.”