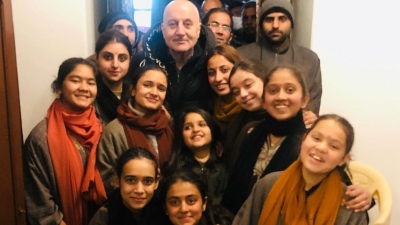 New Delhi–The Global Kashmiri Pandit Diaspora (GKPD) organised a pre-release virtual event on Saturday to introduce the movie “The Kashmir Files” and to kick-start the US wide promotional tour of the movie starting from November 26 till January 6, 2022.

Noted community stalwarts Kashi Pandit, Chaman Lal Gadoo, Moti Kaul, and Sudhir Sopory released the movie brochure and “behind the scenes” video of the movie on behalf of the community.

Sandeep Bamzai, Editor-in-Chief and CEO, IANS, was the keynote speaker at the event.

In his keynote address, Bamzai shared some details of his recent visit to Kashmir, which was both painful and encouraging for him at the same time.

There has been a great deal of development in Kashmir in the past few months under the leadership of present Lt Governor Manoj Sinha with great boom in tourism and associated industries which is very encouraging and praiseworthy, he said.

However, he was pained at the site of his ancestral home, which he has been unable to visit and live in for a very long time, ever since he, like lakhs of Kashmiri Pandits, was made a refugee in his own country.

Vivek Agnihotri, the noted director, and Pallavi Joshi, the noted actor, who have directed and produced the movie under their banner IAmBuddha and VRA productions also attended the event as special guests of honour.

On behalf of GKPD, Surinder Kaul welcomed the guests and gave the audience the background information on how the movie was conceived and its important role in increasing worldwide awareness of the story of Kashmiri Pandit genocide and ethnic cleansing.

He emphasised that the objective of the movie is not to propagate malice towards any religion/community but to highlight a part of history that has been largely ignored till date. He also shared the details of the US wide movie promotional tour that has been organised starting November 26 whereby the movie will be screened at all major US cities and prominent venues like the Capitol Hill and thanked the wider Indian community in the US for overwhelming supporting the movie.

Vivek Agnihotri and Pallavi Joshi spoke about the behind-the-scenes hard work put in by the team and thousands of hours of research, that has gone into making this movie with the hope that they are able to do full justice to our story.

Chaman Lal Gadoo spoke about his role in helping the beleaguered community in 1990 as an office bearer at the Kashmiri Samiti Delhi and that a white paper on the community situation was released in 1996. The community focus at that time was to provide education to our children and he and his organisation played a key role in safeguarding this. This helped the community immensely in time of distress.

Kashi Pandit thanked the production team for their efforts. He talked about the challenge of radicalisation and the herculean efforts that are needed to overcome these threats. This is the only way to save our civilisation from being annihilated. His contribution towards highlighting our story at the global level including at the United Nation was highly appreciated by all present.

Sopory talked about the importance of media and movies such as “The Kashmir Files” in highlighting our story. Movies leave a lasting impact on the minds of people especially those in power and have an intergenerational impact. How world over memorials and like the Holocaust Museum in Germany have educated generations, he noted.

The event was watched online by thousands of people from across the globe. (IANS)