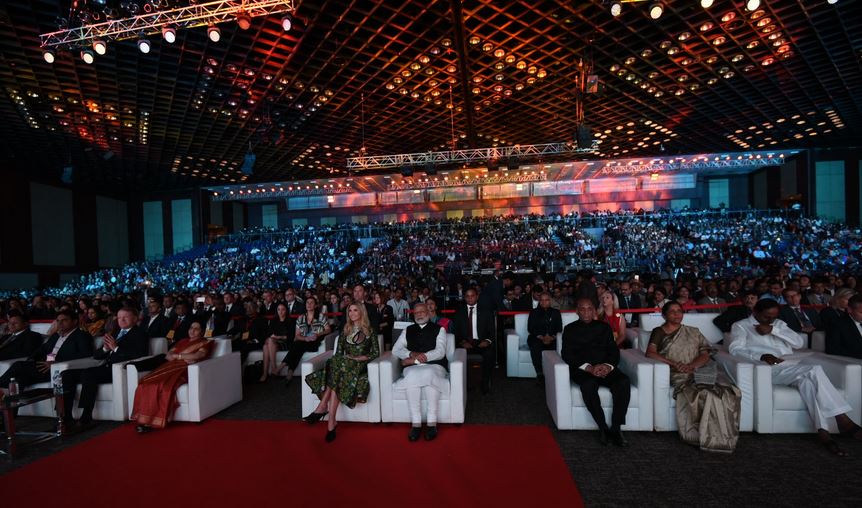 Hyderabad–The eighth Global Entrepreneurship Summit (GES), which ended here on Thursday, inspired early stage entrepreneurs, especially women from around the world, to take their ideas to the next level.

Many succeeded in networking with others including investors.

A few entrepreneurs were successful in getting investors, some managed to initiate deals with venture capitalists while many others developed valuable contacts.

A handful of entrepreneurs showcased their products and services at this global platform. The businesses also got an opportunity to participate in the pitch competition and some returned with bagful of rewards, all worth $400,000.

The participants heard success stories of others and inspiring speakers during the three-day event focused on women entrepreneurs and co-hosted by the United States and India.

Thirteen-year-old Hamish Finlayson, the youngest entrepreneur at GES, succeeded in finding a partner for his virtual reality app. The Australian boy has partnered with Melzo, an Italian virtual reality player.

The app developer is an autistic but this has so far developed five apps including one to help those with autism spectrum disorder (ASD).

Through his virtual reality game, Hamish is aiming to teaching children and adults with autism life and social skills to make their life easier.

“It was a good learning experience. I developed contacts with many entrepreneurs, exchanged ideas with them and also made a pitch before investors,” Reyhan Camalova of Azerbaijan told IANS.

The 15-year-old girl has founded a startup to harvest energy from rainwater. She was one of the women entrepreneurs mentioned by US President Donald Trump’s daughter and advisor Ivanka Trump in her speech.

“We are overwhelmed with the response we got for our product here,” said Yamini Lavanian, co-founder and Director, AmbuPod, who displayed a mini ambulance which can be pulled by a motorbike and can also be converted into a mobile clinic.

Ivanka, who led the US delegation, stole the show at GES. She not only attended the glittering inaugural along with Prime Minister Narendra Modi but addressed some sessions and watched the pitch competition to boost the young entrepreneurs.

They highlighted the problems faced by women entrepreneurs, their achievements, struggle and the way ahead.

The event was held for the first time in South Asia. About 1,500 entrepreneurs, investors and supporters of eco-system from 150 countries came together for networking, mentoring and investment matchmaking.

About 53 percent of the participants were women, the highest-ever in GES. The event focused on on four innovative, high-growth industries — healthcare and life sciences; digital economy and financial technology; energy and infrastructure and media and entertainment.

NITI Ayog CEO Amitabh Kant is pleased over the successful conduct of the event. The thousands of “contacts the participants were able to establish is just phenomenal and mindboggling”, he said. (IANS)