New Delhi– As millions of devotees continue to gather in the Kumbh nagri to take a holy dip at the confluence of the Ganga, Yamuna and the mythical Saraswati rivers, a timely book throws light on the “divine purity” of the Ganga, with its findings suggesting that the pious river has been synonymous with the “threshold of the afterlife” since time immemorial.

Titled “Ganga: The Many Pasts of a River”, the 450-page seminal account has been authored by Sudipta Sen, who is a professor of history at the University of California-Davis.

Though the author touches on, and explores in detail, a range of issues surrounding the Ganga, including the river as “a celestial being” in itself, or a “mother goddess” among Hindus, or a “water body with miraculous healing powers”, it is the insight that he provides on the Ganga being synonymous with the threshold of the afterlife that stands out. 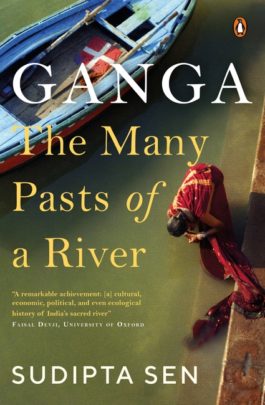 Sen draws on the accounts of seventh-century Chinese traveller Xuanzang, who visited Prayag when it was surrounded by forests full of wild elephants.

“Here he saw hundreds of men fasting for days before immersing themselves in the river for a last ritual bath before committing suicide by drowning,” he notes before explaining that Xuanzang found that “the confluence was enchanted” as monkeys and deer from the nearby hills also came “to die in large numbers for salvation”.

Notably, the holy dip at the Kumbh, according to the legends, is also said to open the doors to heaven. It is thus customary that after taking the holy dip at Kumbh, devotees offer prayers to the Sun god, seeking forgiveness for their sins and hoping to start afresh after the ritual.

Sen, who has previously authored “Distant Sovereignty: National Imperialism and the Origins of British India” and “Empire of Free Trade: The East India Company and the Making of the Colonial Marketplace”, finds it remarkable how Ganga has been a comfort for the dying.

“In the fifteenth century it was common practice for penitent Hindus from all over India to end their lives at Prayag by jumping from a great banyan tree either into a well or directly into the Ganga — a custom that was finally ended by the Mughal emperor Akbar,” says Sen.

It is in this context that the author maintains that “such unflinching conviction in the face of death” unveils how a river can become synonymous with the threshold of the afterlife. He describes the river as “integral to the continuum between the worlds of the living and the dead”.

The book, published by Penguin Random House India, has been endorsed by several leading academics as well as authors, including Assa Doron from Australian National University and Faisal Devji from the University of Oxford. (IANS)