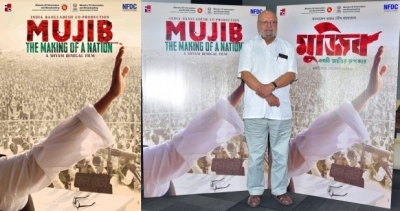 Mumbai–National Award-winning filmmaker Shyam Benegal who directed the Bengali language film ‘Mujib: The Making of a Nation’ based on the life of the founding father of Bangladesh – Sheikh Mujibur Rahman – says the language was never a barrier for him in making the film.

Shyam told IANS : “I did not know the Bengali language, even though I am familiar with the sound of the language. But I never fear losing the nuances in translation. Nothing is lost in translation. They (actors) knew the language I speak, I know the emotion I want in the performance. You see, when we are speaking in a language, the thing is in the idiom.”

However, his relationship with Bengal and Bengali culture goes a long way. When Benegal was a youngster, one of his elder brothers who used to stay in Kolkata back in the days, used to send him different books and magazines by post.

“Back then I was not familiar with the city of Kolkata, in fact then, it was Calcutta (smiled). Calcutta was the hub of literature, politics, and cultural discussion in 1940s and 50s. I remember one of my uncles, who was a part of Bose’s All India Forward Bloc, was also a huge admirer of Bengali literature. I was eight or nine years old I guess…when he would come to our house in Hyderabad, read out Bengali books aloud. Then he would translate that in English for me.”

The veteran filmmaker said that such memories of his childhood somewhere stayed in his mind and eventually all came out, when he made films like ‘Bose’ and ‘Arohan’.

“I would say my friendship with Bengal, and the city of Calcutta started with ‘Arohan’ when I shot the entire film over there,” he recalled.

The protagonist of the film ‘Mujib’ is played by Bangladeshi actor Arifin Shuvoo.

Asked about his thought behind the casting, Benegal said, “He is a very good actor, a method actor. Earlier he had worked on Sheikh Mujibur Rahman. Since he is a performer, he also acted few speeches by Rahman as part of his live performance. He managed to get the nuances right. He was absolutely steeped in the process. The actor has that fire that we saw in those speeches of Bangabandhu. The audience will see once the film comes out.”