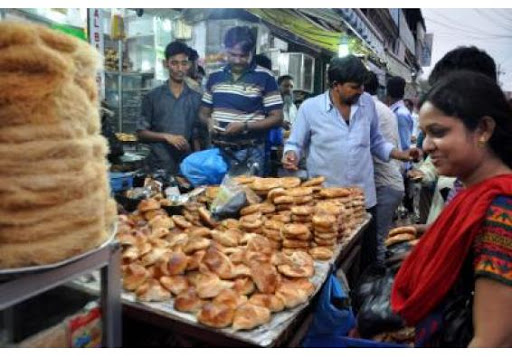 Incidentally, it was working normally even after the March 12, 1993 serial bomb blasts, but it’s fate in Ramzan 2020 will be known only after May 3.

Missing would be the enticing, mouth-watering aroma of over 400 non-vegetarian cuisine items on offer, plus around 100 assorted desserts and beverages, making it the monthlong mecca for food lovers – irrespective of religion – thronging there.

“This is a sad truth. We are planning to request Mumbai Police Commissioner to at least grant us permission for two hours during the evening ‘iftaar’. The morning ‘sehri’ people will somehow manage,” a worried Abdul Rehman Khan told IANS.

Khan is owner of the decades-old landmark restaurant, ‘Mashaallah Cuisine’, nestling under the shadow of the 250-year historic Minara Masjid (Tower Mosque), from where it all started.

For 70-year old Shabbir Ajmanwalla, from the adjacent Bohri Mohalla, the spectre of ‘sehri’ and ‘iftaar’ without the goodies from the roadside eateries is akin to blasphemy.

“My father, in the 1920s, used to tell us many stories of the food market. Later, in the 1960s, as young boys, my friends and I would hop onto a tram for purchases to break our daylong fast,” he reminisced.

In those days, trams plied in south Mumbai from Colaba to Dadar Tram Terminus (Dadar TT, as it is known even today after trams stopped in 1964!), traversing through congested Pydhonie, Nagdevi Street, and Mohammed Ali Road.

“The 24×7 Ramzan market started as tiny food stalls around this mosque and kept expanding over the centuries. But in the past six-seven decades, it acquired a cult-status for the sheer variety of food, their unique preparation styles and memorable taste, attracting people from around the world,” Ansari told IANS.

According to 62-year-old Karim Patel, a local businessman with a shop near the Minara Masjid, Muslims comprise barely 25 percent of the patrons, the rest comprise around 60 percent non-Muslims and remaining foreigners or tourists.

“Certain varieties of food and desserts are specially prepared or available only during Ramzan, so people make it a point to come and savour these. A few are handed down by families from generations and are truly unique,” Patel said with a smile.

“The main market is spread around a km on each side of the Minara Masjid, the rest is a spillover that comes up during Ramzan owing to the huge demand. The main market has around 100-plus food stalls, the spillover comprises another 400-odd sellers. It’s a celebration of ‘National Integration through food’ in Ramzan,” said Khan.

Teeming in a tiny corner in the congested Muslim-dominated residential-cum-commercial district, this year many non-Muslims may experience withdrawal symptoms of Mohammed Ali Road food market.

“Muslims will continue to fast this year, but we will be starved without our favourite dishes from this market,” rued a regular connoisseur, Rakesh Upadhyay, an Ayurvedic pharmacist from Borivali.

He, along with Nagpad cardiologist (Dr) M. Qasim Nagori and Dharmendra Thakur had roamed the street several nights even in the aftermath of the Mumbai serial blasts.

Khan said on an average, the food market – with 90 percent non-vegetarian offerings — attracts around 40,000 people daily, and during weekends, the number shoots up to 100,000, and the month averages around 1.50 million hungry customers in that swaming enclave.

“On an average, a person spends between Rs 500-800 for a hearty meal, so calculate the massive businesses generated here. There are thousands of families who work only in Ramzan month and survive the remaining 11 months. That’s the kind of ‘barkat’ (benevolence) here, thanks to Minara Masjid,” he said.

Patel said each stall employs roughly 10 persons and for Ramzan specialists are called from around the country to help cope with the bulk cooking requirements.

“Though the theme is Mughlai cuisine, we get specialized ‘Khansamas’ (traditional master chefs) of biryanis from Lucknow, niharis from Delhi, tawa food experts from Bahraich (UP), and the like,” said Khan.

The markets are thronged by commoners and celebs, diplomats, domestic and foreign tourists, and hungry hoppers who drive down from places in 200-300 km range like Surat, Bharuch, Nashik, Pune, Satara, Goa, for a ‘culinary wild night out’ and drive back home the next morning, said Nagori.

However, most local restaurateurs confide they don’t encourage celebs as “they disturb the whole market with their brief appearance”, although many bigwigs quietly wait in their dark-tinted glass vehicles, collect their packed food without any fanfare and quietly retreat to enjoy their food elsewhere.

Occasionally, students of catering colleges come here on a ‘field assignment’ while stern professional celeb chefs have been sighted here with their critical eyes giving way to magnanimity in the flood of hungry minions devouring the roadside delicacies, Ansari said.