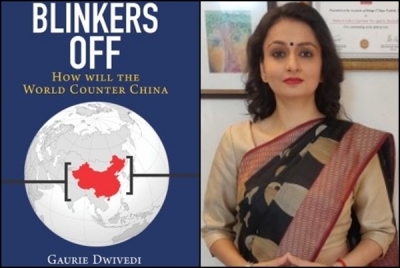 New Delhi– China’s belligerent actions to undermine the world order might pose a greater threat than the erstwhile USSR due to its economic might, military capabilities and vast influence spanning across Asia, Europe and Africa but the world is not headed for a Cold War 2.0 as is being suggested in some quarters. It is the collective response of the liberal world, America and its allies “that will together decide the fate of the post-pandemic world order, says Gaurie Dwivedi, an analyst of issues relating to strategic affairs and diplomacy and a Visiting Fellow with the USI (United Service Institution of India) think tank.

India and the Quad can play a major role in the recalibration but New Delhi would have to drastically realign its economic, diplomatic and national security apparatus, the US would need to revamp its alliance network in Asia, and the Quad would have to complete its “unfinished agenda” to “create deterrence beyond strong condemnations” of China, as has been the practice till now, Dwivedi writes in “Blinkers Off – How Will The World Counter China” (Pentagon Press).

As for the recent developments in Afghanistan, China “will exploit the present situation to amplify India’s security concerns since it wants to restrict New Delhi’s ability to act as a regional strategic heavyweight. A combination of deft diplomacy, economic partnerships and deeper linkages with the Quad countries can counter the same”, she says.

“No, we are not in another Cold War. And no, America is not as powerful as it was at the peak of the Cold War to handle such geo-political tensions all by itself. This means it is the collective response of the liberal world, America and its allies that will together decide the fate of the post-pandemic world order.

“The once-in-century corona virus pandemic became a catalyst to unravel the many layers of influence that Beijing wields. And as it displayed all of these unabashedly, it accentuated the multiple fault-lines in the globalised world. The pandemic exposed the extent of the world’s vulnerabilities and its ‘China dependence’,” Dwivedi writes.

“Wishing away China is neither possible, nor desirable. What is needed is a clear plan of action to ensure that the CCP’s (Chinese Communist Party’s) imperialistic efforts are defeated,” she adds.

The first part details China’s “stupendous rise” aided by Western powers that were “blindsided by economic gains of their partnership with Beijing to check its hegemonic tendencies early on”. The second part details China’s efforts to alter the global power equations by forging partnerships with countries like Iran and Pakistan. The third part highlights the “fault lines that the corona virus pandemic exposed and the scale of threats that Beijing and its supreme leader Xi Jinping now pose to the world”.

The 95-page fourth part, spread over six chapters and what could be considered an epilogue titled “What if Another Virus Originates in China”, suggests a roadmap “that is in sync with the challenges of the 21st century where it is not enough to just match frigates and submarines, but to defeat China’s plans to weaponise trade, information and its global clout, which has turned even UN Secretary-General into its cheer leaders”.

What does this 360-degree strategic roadmap entail?

A key element is the need to reboot alliances.

“One of the most crucial aspects of a multi-pronged approach to deal with China involves calibrating the existing network of treaties and strategic partnerships that America, India and Japan have” as also with each other, Dwivedi writes, adding: “To eliminate Beijing’s biggest source of strength in the region, which is its geographical superiority, regional partnerships need to be cultivated more.”

Noting that New Delhi’s “enhanced role in America’s Indo-Pacific strategy will need to be further enhanced”, the US-India relationship, “which can shape the future of Asia and fix Chinese hegemonic designs, can realise its true potential only if several issues are ironed out”, for instance their divergence in their threat perceptions; Russia’s close ties with India, manifest in the latter’s decision to purchase the S-400 missile system in preference to the USPAC3; and the inability of either partner “to fulfil the expectations of the other”, the author states.

And, if QUAD is to succeed in its second innings, “there has to be greater convergence among the member nations to check China’s rising influence, not just in the SCS (South China Sea), but also in the IOR (Indian Ocean Region). The Quad must supplement New Delhi’s response to China’s growing clout in its bastion. India must make amends to its neglect and apathy which allowed it to loosen its presence in this region”.

India’s decisive pivot for the IOR revolves around its roadmap for the strategically located Andaman and Nicobar Islands, which, due to their geo-strategic location provide “an ideal location and opportunity to become a bigger stakeholder in the IOR and SCS” and can be the gateway for a larger Indian presence in the region, possibly all the way till the Western Pacific. However, to boost capabilities and exploit their full potential, “active engagement and collaboration with other navies, including the US Navy, is needed”, Dwivedi maintains.

At the bottom line, India “needs to first start by rebuilding its partnerships with the littorals,” she adds.

Flowing out of this is the need to Redefine Military Deterrence.

Admitting that despite serious and growing security concerns, nations will not be in a position to substantially hike defence spends, “the next best option for all like-minded countries will be to build complementarities amongst each other. America needs to institutioanlise this approach, both with its formal allies and close partners like India”, the author states.

On its part, India will also have to “overhaul its entire security architecture and strategic outlook to respond to the China challenge. New Delhi’s concerns regarding Beijing, though amplified on land, are equally urgent at sea. On land, India will need to address its security gaps given the pronounced threat both from China and its almost-vassal state, Pakistan. This will require a larger strategy to deal with its two hostile neighbours in a possible ‘two-front’ war. A vital component of this is to expedite military modernisation”, the book says.

Although the defence budget is $46.9 billion for 2021-22, almost $29 billion of this is eaten up by salaries, pensions and upgrading of essential arms, leaving “inadequate funds for modernisation of the kind that is urgently needed”.

More importantly, India needs to “invest big in its military purchases” but “does not have the luxury of moving up the cycle of indigenous defence production (though large orders have been placed with home-grown HAL), which may take many years (to fructify)”, Dwivedi maintains.

Thus, building deterrence within geopolitical realities “will be the biggest test for Joe Biden, Narendra Modi and Yoshihide Suga”, she adds.

Dealing with the aspect of Economic Warfare, the book says that beyond the immediate recovery and revival of its economy, “India’s roadmap to determine its economic fate against China must focus on making a concerted effort to be the pivot for the fourth industrial revolution. Boosting manufacturing, exports and a clear focus on new trade deals will allow India to stand tall against China economically”, the author states.

Warning that the next financial crisis will occur in the China with the country’s debt rising from 140 per cent of the GDP in 2008 to over 260 per cent by 2019 – over 5 per cent of the global GDP, the book says the Biden administration needs to be ready with a plan to contain the damage to other large markets.

“Reducing dependence, effective sanctions programme and providing sustainable project finance to other countries which will reduce their China exposure (largely due to loans granted under BRI) will collectively minimise the cascading effect. Unwinding of China’s debt pile will cause the biggest reset in the global economy, and forward planning for the same will determine the pecking order of large economies,” Dwivedi writes.

The fourth element is to Fix Global Governance, which includes “repairing” the WTO.

It is time for America, India and Japan, “large economies that have the potential to hurt Beijing economically, to finalise new trade deals with China. The premise of any future deal should not be higher committed purchases of American goods by China; instead, it should insist on subsidy cuts by the Chinese government. The road to free trade cannot go via higher tariffs. But to deal with Beijing in the short term, the USA, the EU and India must enforce coordinated tariff hikes disadvantaging Chinese negotiators in trade discussions”, Dwivedi writes, pointing out that Donald Trump’s “repeated tariff hikes had forced Beijing to negotiate”.

One other important aspect is that the UN must reflect the geo-politics of 2021, not 1945 “and must pave the way for the capabilities of major players like India and Japan to be leveraged in a bigger way. The developments in the Indo-Pacific and China’s increased sabre-rattling have acted as a catalyst to start the process of reforming the UN”, Dwivedi maintains.

“As India is poised to play a larger role in the Indo-Pacific region as possibly project power in the Quad, its continued exclusion from P-5 is inexplicable,” she adds.

The world must also Prepare for I-War as future warfare will not just depend in military superiority “but will also be decided by the ability to conquer new frontiers of technology, including cyber and outer space”.

As a key stakeholder “in shaping global politics and as a technology powerhouse, India can play a important role in charting out a roadmap for the world’s digital strategy. New Delhi can contribute in creating innovative solutions to bolster the information systems of poor nations that are more vulnerable to sophisticated cyber attacks due to inefficient/ineffective safeguards”, the author states.

Dewivedi then delivers the final kicker.

“Xi Jinping has whipped up domestic sentiment on an ancient and vague concept of ‘Tianxia’, translated as ‘all under the heaven’. This meant the world was divinely bestowed upon the emperor, who as the ‘son of heaven’ had ‘heaven’s decree’. The epicentre of the world was the Chinese emperor and countries were just tributaries and vassal states.

“The CPC is trying to create the same imagery, with the BRI expected to create vassal states all over the globe, and Jinping as the ‘legitimate sovereign in the world’. The world map would be just one of the casualties for such a vision to be fulfilled. (IANS)