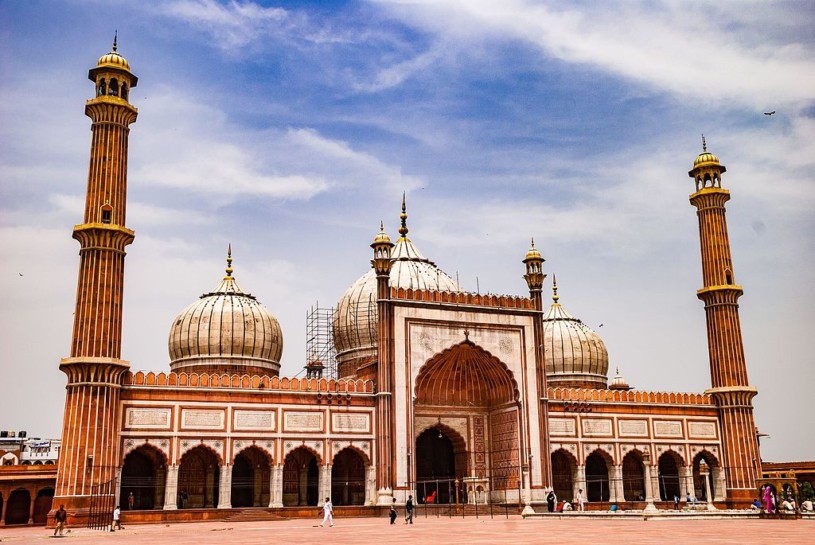 New Delhi– The silence was broken by a siren, followed by an azaan — a prayer call — from the Jama Masjid. It was time to break the daylong fast.

Minutes earlier, people had sat still with plates full of dates, fruits and snacks in front of them, uttering prayers under their lips. According to a Muslim belief, a prayer said just before the breaking of a Ramazan fast is always answered by Allah.

The humming turned into light banter as a sherbet, a fruity drink, quenched the parched lips and dried tongues. After the evening prayers, people spilled into the bazaar, filling every inch of it.

“We fetch special varieties of sevai (vermicelli) for Ramazan,” Mohammed Ajmal of Haji Tea Stall shouted over the noise of a bustling bazaar.

“We have khimami, rumali, moti and bareek sevai which are prepared differently. Also we have three varieties of pheni (a kind of pre-fried sevai) and khajla,” Ajmal said.

The shop claims to be selling these and other preparations for the last 50 years.

Both pheni and khajla — which looks like a big round kachoris — are dipped in hot milk and left overnight, to be consumed at sehri — the pre-dawn meal Muslims have before starting their fast.

The smoke emanating from the open ovens grilling chicken and kebabs and the large pans frying fish and chicken send their appetising smell wafting through the air, adding to the overall aura of the place.

With Eid barely a week away, most of the people in the area are busy shopping for clothes and footwear to mark the end of Ramazan. The busy shopkeepers in busy streets have no time to relax as customers keep pouring in.

“We sell the finest of kurtas and shervanis and our kind of variety is not available in the entire old Delhi, let alone the Jama Masjid area,” Mansoor Ahmed of Prince Majestic Kurta boasted as he pointed towards the mannequins displaying the kurtas.

“Our range starts from around Rs 900 and goes up to Rs 2,500 for a kurta. At this time, however, cotton kurta-pyjamas are in more demand due to the hot weather,” he said.

A group of women were eyeing the stylish burqas and veils outside the Burhan Emporio.

“The frock burqa is in vogue these days. The overcoat burqas are also selling,” Farhan, the boy manning the shop, said as he attended to a group of women haggling over the price.

The beggars, some of them children, keep pestering the passersby, especially those they deemed to be “outsiders” and hence soft targets for them. The locals would just shoo them away. A small crowd of “hungry” beggars was sitting outside an eatery, aptly called the Gharib Nawaz Hotel, patiently waiting for people to buy food for them.

“You can feed a hungry person for Rs 25,” the man at the counter invites everyone.

With religious fervour at peak during Ramazan, the shops selling framed calligraphic art of Quranic verses, called tughra, is the centre of attraction for many. Muslims traditionally adorn their homes with such tughras.

“We sell them round the year, but during Ramazan we also keep them outside the shop to display prominently as a lot of people from outside visit this area,” said Ajmal, the shop owner.

The chicken and mutton biryanis sell by the kilogram, and usually there’s a queue for the spicy fare. Rs 120 per kg is not too much to shell out for a wholesome meal.

“We come here quite frequently, but during this month it is special. The place is just buzzing with life and the aura is different. I make it a point to visit Jama Masjid at least once during Ramazan,” said Kajal, a young student who visited the place with her friends. For many Delhites, it’s the “in-thing” to do.