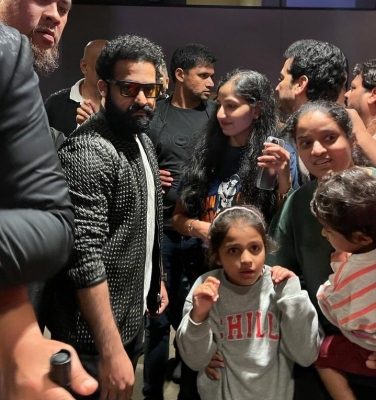 Hyderabad– Ahead of their appearance at the Golden Globe awards evening in Los Angeles, ‘RRR’ director S.S. Rajamouli and NTR Jr are soaking in the love and affection of their fans in the city.

On Monday night, both Rajamouli and Tollywood’s ‘Man of Masses’ NTR Jr attended the film’s screening at LA’s iconic TCL Chinese Theatre on Hollywood’s Walk of Fame, where he was cheered by fans.

The iconic Chinese Theatre, which houses one of the world’s biggest IMAX screens, witnessed an epic turnout of ‘RRR’ fans at the screening, whose tickets were sold out in 90 seconds.

NTR Jr was seen smiling and interacting with the swarms of fans who asked for selfies and chanted ‘Jai NTR!’. It was a historic moment for an Indian film at the century-old Chinese Theatre.

Rajamouli and NTR Jr arrived in New York a few days ago and attended a screening of ‘RRR’ followed by a reception at the DGA theatre. Early on Wednesday morning, India time, viewers in India will be able to see them at the Golden Globes.

The historical magnum opus has been nominated for Best Picture – Non-English and Best Original Song (for ‘Naatu Naatu’).

Following the awards event, NTR Jr will begin shooting for his upcoming NTR30, directed by Koratala Siva of ‘Janatha Garage’ fame. The film is due for theatrical release on April 5, 2024.

He also has NTR31 on the cards. It will be helmed by ‘KGF’ director Prashanth Neel. (IANS)