New Delhi–The head of this Maharashtrian family served former Presidents of India Pratibha Patil and Pranab Mukherjee as a cook — and his daughter says that her entire family has “challenged gender norms” as she has seen her father taking ideas from her mother on certain occasions while cooking.

“My mother (who used to work with All India Radio as news reader in the Marathi division) is a good cook as well, but her work in the kitchen is not recognised as she did not have a degree. Since Pratibha Patil was a Maharashtrian, my father took ideas from my mother on certain occasions,” the 20-year-old Vedvanti Kasture told IANS while explaining how the entire family was involved when father Machindra Kasture used to make food for the “world’s high and mighty”.

Machindra served during the tenure of Pratibha Patil and Pranab Mukherjee and Vedvanti says that she is proud of the fact that the family has broken the “gender norms”.

“I am most proud that our house has always challenged gender norms. I have grown up seeing my father in the kitchen cooking. My little brother is a better cook than I can ever be. He was the one who introduced me to my first glass of wine,” she said.

Recalling how he started his journey as a chef, Machindra says that he started when there was no glamour attached to this field and people hardly knew who a chef was.

“I was the first and only chef appointed in Rashtrapati Bhavan; so everything was new for me as well as for that place. I would say it was a great learning experience, catering to the world’s high and mighty when everything is on your shoulder. That pressure is unmatched and it has taught me what no school can teach,” he said.

He was working in ITDC Ashok Hotel when, in 2007, he was sent on a deputation to Rashtrapati Bhavan as then President Pratibha Patil was looking for a Marathi chef. Since that day, their lives have completely changed.

From taking care of food for events like Bharat Ratna awards and the swearing-in ceremony for Prime Minister Narendra Modi, he also represented India as a member of Le Club des Chefs, when he went to the White House to meet then President Barack Obama, UN headquarters to meet Secretary General Ban-Ki-Moon in 2013 and Queen Elizabeth II on a private visit to Buckingham Palace in London in 2014. 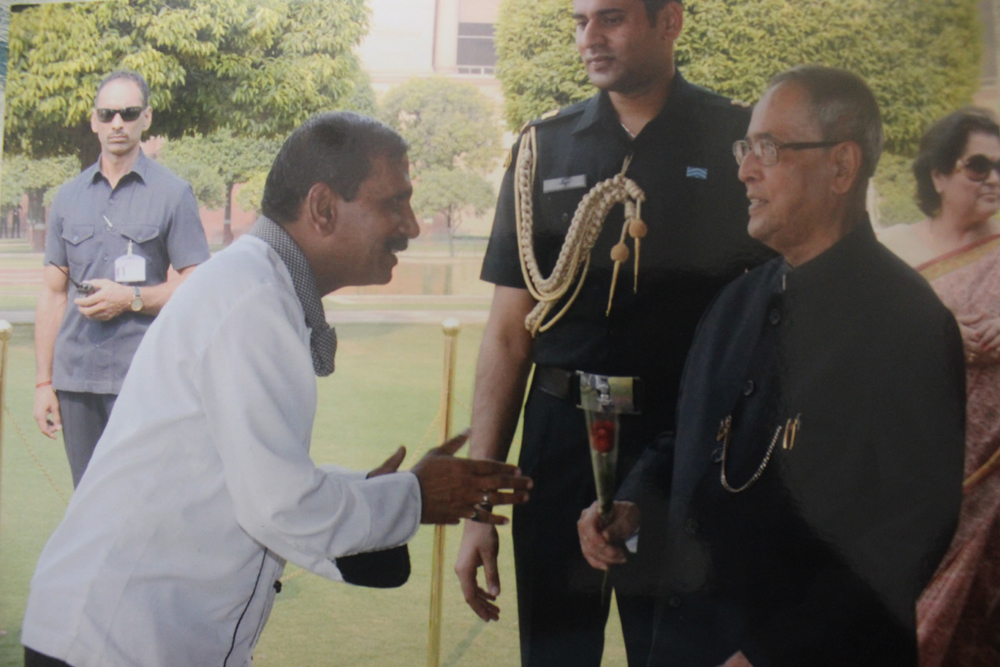 “Pratibha Patil was a vegetarian; on the contrary, Pranab Mukherjee was a fish lover and so definitely it was a shift of cooking style. It used to challenge me to bring out something new every time I cooked.

“I was mostly involved with formal banquets for visiting heads of the state; so my job was to cater to these leaders from different nations keeping in mind their eating habits and at same time providing them the best of our Indian cuisine. So I had to be master of all,” said the National Award winning chef who is currently working at Ashok Hotel, which is a flagship of ITDC.

“We look after VVIP catering for Prime Minister’s house, Vigyan Bhavan and Hyderabad House,” he said.

With the father involved in serving the country’s first citizen, was it difficult for the family to stay calm and lead a normal life?

The daughter replied: “Whenever I used to write my address as President’s Estate, New Delhi, it used to catch eyeballs. I have never seen a place more beautiful than this, with all its protocols and decorum. There are lush green lawns, the majestic dome of Rashtrapati Bhavan just in front of your eyes when you leave your house, kitchen gardens and peacocks fearlessly roaming around. The nearest garden to our home was Mughal Garden.

“At the same time, ironically, all these beauties were guarded 24/7 by men in uniform. We had our security passes to enter the premises. Security was pretty strict. My friends always had a hard time getting into my house as they faced this board “Entry beyond this point is restricted”; so special passes were to be made to enter my house.”

“In Rashtrapati Bhavan, celebrities become like normal citizens. We used to go to the movie screenings in President House Auditorium and the star cast used to be present there. I have seen ‘Piku’ in the same auditorium as Amitabh Bachchan. I have congratulated Sachin Tendulkar for his Bharat Ratna award too,” she said.

But every success comes with a cost.

“Due to his work he has missed some important days of my life like my investiture ceremony as he was in the US meeting the POTUS (President of the United States) and my first day of college when he was in Buckingham Palace meeting the Queen for a cocktail. But no regrets,” she said. (IANS)