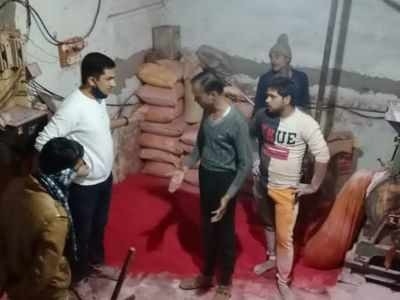 The factory is located in Navipur area and the police raided it on a tip-off.

The unit owner, Anoop Varshney, who is also the office bearer of the Hindu Yuva Vahini, has been arrested.

Joint magistrate Prem Prakash Meena said, “We have seized over 300 kg of fake spices being packed in names of some local brands.”

He added that during the raid, several spurious ingredients used to prepare the fake spices were found, including donkey dung, hay (bhusa), inedible colours and drums full of acids.

More than 27 samples have been sent for tests and an FIR will be registered under the Food Safety & Standards Act, 2006 once the lab report comes, he said.

Varshney has been remanded to judicial custody under section 151 of the CrPC (arrest to prevent the commission of cognizable offences).

Meena told reporters that Varshney was unable to provide a license for operating the spice factory at the location where it was being run. He also could not produce the license of the brands, which were being packed.

It is also being checked if the ingredients, prepared in the unit for making spurious spices, were supplied to other units in the city too.

According to food department officials, the adulterants might prove to be a health hazard, especially if consumed over a long period of time. (IANS)