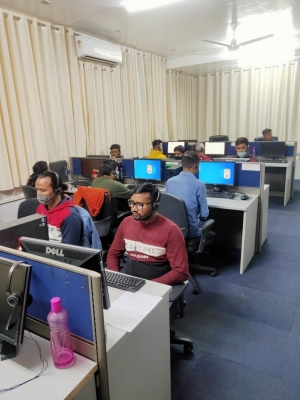 The call centre used to cheat American nationals on the pretext of computer security and used to charge $100 to $500 as service charge via e-cheque, debit and credit cards, the police said on Thursday.

The police have arrested two brothers in connection with the case and seized two laptops and two hard disks and other electronic gadgets from the spot.

The arrested accused have been identified as Ranjan (25) and Akshay Kumar (28), a B-tech graduate. The two broethers are residents of Chhatarpur Enclave in New Delhi.

According to the police, following a tip-off, a team from the CM flying squad led by ACP Inderjeet raided the call centre on Wednesday evening. The call centre was located on the 5th floor of Emmar Green in Sector 61.

There they spotted 6 boys and 2 girls who were communicating with the American national in an English language (American accent).

“The call centre was being operated without permission. Also, it did not have any licence issued by the Department of Telecommunications (DoT),” the police said.

“During questioning, the accused revealed that they used to communicate with US citizens to resolve computer security issues and used to charge nearly $100 to $500 per client as service charge,” the police said, adding that the involvement of other people cannot be ruled out.