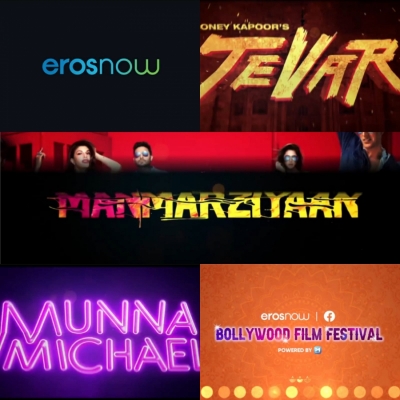 Mumbai–Eros Now is coming up with a dedicated Bollywood Film Festival on Facebook Watch on Diwali. The OTT platform has partnered with Facebook to bring some of the finest films from its library of over 12,000 Indian films and stream it on Eros Now’s Facebook page from November 3 to December 2.

The movies have been specially curated to ensure the right mix of genres, scale, and relevance during the festive season.

The list has titles that span three decades: the 90s, the 2000s and the 2010s and includes names ranging from ‘Hum Dil De Chuke Sanam’, ‘Devdas’, ‘Tere Naam’, ‘Love Aajkal’, the most loved releases of the last decade such as ‘Cocktail’, ‘Vicky Donor’, ‘Raanjhanaa’, ‘Manmarziyaan’, and ‘Shubh Mangal Savdhan’ to new releases like ‘Hathi Mere Sathi’ and many more. (IANS)