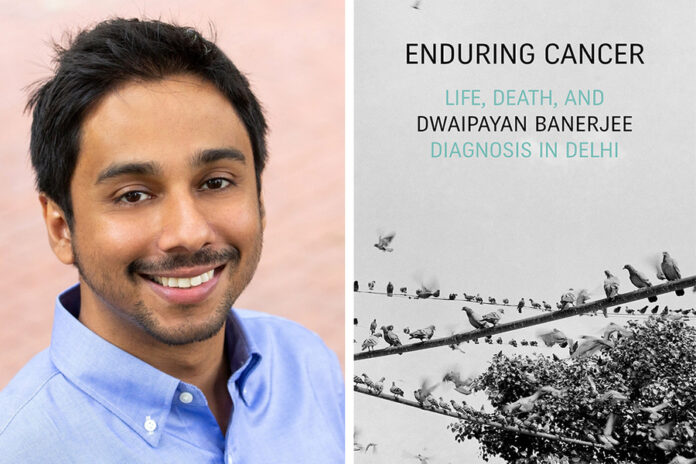 CAMBRIDGE, Mass. — When Dwaipayan Banerjee began studying the lives of poor cancer patients in and around Delhi, India, he noticed something distinctive: Virtually none of them used the word “cancer” itself. One elderly man Banerjee met got upset at seeing a medical van with the words “caring for cancer” on the side; the man insisted he was actually suffering from “oncology.”

Banerjee also learned, from a medical resident at a hospital, to think of these patients as experiencing “shak,” a Hindi word implying doubt, skepticism, and suspicion. For a patient, a diagnosis would create fears about not only physical well-being, but also the social stakes of the disease.

“The commonplace use of the word ‘shak’ by families and patients indicated not only the doubt that a lump or growth could be a tumor, but also revealed longer and deeper misgivings,” Banerjee says. “These doubts and suspicions were often about a lack of faith in the public health system that had failed them before, and skepticism about finding support from doctors and kin.”

For many people, having cancer creates “a sense of being unmoored from prior certainties about oneself and one’s place in the world,” writes Banerjee, an associate professor in the MIT Program in Science, Technology, and Society, in a new book exploring the world of Indian cancer patients.

In the book, “Enduring Cancer: Life, Death, and Diagnosis in Delhi,” published by Duke University Press, Banerjee delves into the psychological and social worlds of generally low-income cancer patients. The work illuminates the culture that has emerged around cancer in India — such as the tendency to avoid naming the disease — and aims to spur thought about how other cultures cope with cancer.

“It’s not as if people aren’t very careful about how they talk about cancer in the U.S. or anywhere else,” Banerjee says. “It’s still something that evinces a lot of stigma, in the same way that other diseases strongly associated with death do. People are uncomfortable around death and the possibility of dying, anywhere in the world.”

Banerjee conducted much of the research for “Enduring Cancer” as anthropological fieldwork, studying patients and medical care as an inside observer with two organizations: CanSupport, an NGO dedicated to helping lower-income urban cancer patients, and the All India Institute of the Medical Sciences (AIIMS), a prestigious hospital in Delhi.

The services offered by CanSupport and AIIMS add a layer of care beyond medical procedures, helping patients cope psychologically with cancer or deal with lingering physical pain they experience.

“I grew up in Delhi, and I had never heard of doctors and organizations doing this kind of work,” Banerjee says. “That’s because there were none, at least until these last two decades. That says something about the rise of cancer as a visible problem, as well as the need for palliative care. Very distinctively, at AIIMS, cancer pain is treated as a biomedical condition deserving of attention by the country’s best anesthesiologists, rather than a symptom that can be ignored and left for nonspecialists. The United States has much to learn from this approach.”

To an extent, Banerjee observes, the presence of cancer had long been ignored in the global south by public health experts and policymakers, who associated the disease more with industrialized societies and even claimed that vegetarian diets (where present in India) reduced incidence of the disease. And yet, he notes, even British doctors in India in the 19th century were sending reports home about treating cancer patients, frustrated by the lack of attention paid to the disease by the colonial government.

“The disease has been in India as long as it has been elsewhere in the world,” Banerjee says. “It’s one of the big myths I try to unravel in the book.”

Banerjee also notes how cancer treatment at AIIMS has expanded to include an emphasis on pain management as a part of patient care: “The commitment from them to [address] pain, as highly trained specialists and not just leaving it to public health workers, is really remarkable. Pain is not a mere symptom; it’s part of the disease.”

During his fieldwork, Banerjee closely observed how a cancer diagnosis reverberates around affected families, as well as marriages, both revealing and reshaping relationship dynamics. Many times, he observed, there are delicate decisions about how much information is distributed among families.

“There is this way of distributing knowledge across families rather than putting all the burden on an individual,” Banerjee says. “Doctors are as well-aware of this as anybody else.”

But Banjerjee also found gender differences at work in families, adding tensions to the whole process of family support.

“There are imbalances within families — who gets to be told and who doesn’t — that reveal who has power within the family,” Banerjee says. “It’s often women who are not told and it’s often the male kin who make these decisions. Cancer doesn’t just easily map itself onto what hierarchies and imbalances exist, it changes them and puts pressure on what already exists.”

Even as patients avoid using the world “cancer” and may sometimes seem unclear about the nature of their illnesses, Banerjee believes, they are well-aware of their diagnoses.

“Of course they know,” he says. “They know through different nonverbal cues, from repeated hospital visits, and extrapolate from the treatments they receive. They know how to read between the lines. The decision not to talk about it, or to carefully negotiate speech around it, is more often than not a way of demonstrating care and concern, at a different register than explicit talk. It is a way through which they weave this terrifying disease into their everyday worlds”

But as Banerjee discusses in multiple chapters, there are some explicit discussions of life as a cancer patient in Indian culture, including books and films. Banerjee has mixed views about this material. Like elsewhere in the world, most mass-market books about cancer in India are self-help volumes that provide encouragement, but may also burden people by making them feel unduly responsible for their own wellness.

“These books urge patients to be strong in the face of the disease and to be a survivor and to transcend the pain by the sheer force of personal will,” Banerjee says. “I would be wrong if I said a self-help book does not offer a degree of identification and comfort. It absolutely does. There’s a reason they’ve been popular. But this structure can end up distracting from the more political aspects of the disease.”

Consider some of the book’s titles: ‘The Joy of Cancer,” “To Cancer with Love,” “My Date with Cancer,” and “Cancer Made Me,” which Banerjee says sends a clear message to patients: “Don’t let them know you’ve lost your hair or are experiencing so much pain. Learn to love the disease and let it teach you about not just surviving, but becoming a better person. The assumption here is that the habits of the patient’s life before the disease contributed to its occurrence. For women, this can be especially dangerous, as they are often accused of transitioning to quickly to a “modern” working lifestyle and not taking care of their own health.

“Of course, I see the value of encouraging patients to be resilient,” Banerjee says. “But in the end, I think the books’ intent is to make everyone around patients feel comfortable; not the patients themselves. Instead of ‘loving’ or ‘accepting’ cancer, there is a case to be made for being justifiably upset and angry —  angry at the lack of political will to address the environmental containments and inequalities of medical that have become part of public health systems all over the world.”

For his part, Banerjee says he wants to help readers consider how cancer is experienced by people, and what everyone can do to help.