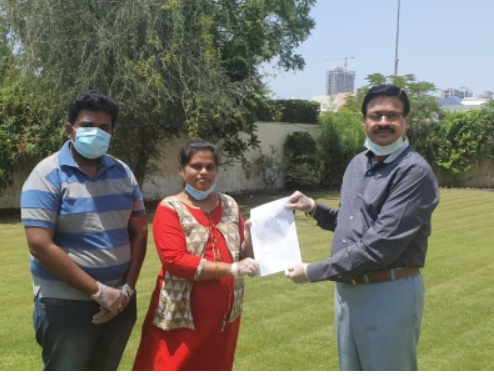 Mumbai–Indian migrants are stranded not only within the country but also abroad and one Dubai-based NRI has taken steps to send them back to their motherland.

UAE’s ‘Masala King’, Dhananjay M. Datar, 56, has rushed to the aid of thousands of desperate Indians queuing up outside the Indian Consulate, hoping for a flight and ticket back home in the Covid-19 pandemic.

For many, India is now virtually the last resort, as they have been thrown out of their rented homes and even forced to spend nights on the roads, others lost jobs rendering them practically penniless, he said of their plight.

“There are many pregnant women, children, tourists and others on short-term visas who have been stranded herea So far, I have organized travel for over 3,000 people to Kerala, Chennai, Delhi, Hyderabad, Jaipur, Lucknow, Goa, Chandigarh,” Datar told IANS over phone.

As there were around 60,000 from Mumbai and Maharashtra stuck there, he spoke with Chief Minister Uddhav Thackeray last week who responded promptly by writing to the Centre to permit the emergency evacuation.

Datar hopes — with Thackeray’s personal intervention — flights to Mumbai would be permitted soon under the Vande Bharat Mission and the Indians can return.

The head of the reputed Al-Adil Trading LLC Group in the UAE, so far Datar has sponsored the tickets of over 1,000 Indians, while the others had booked in advance or possessed return tickets which came in handy.

All those in dire need of repatriation are screened, undergo a mandatory Covid-19 test borne by Al-Adil Group, and complete all other formalities before they are cleared for flights, he said.

This is where Indian Consul-General Vipul extended a helping arm to send home his blue and white-collared countrymen.

“We have already sent a dozen flights to India, repatriating over 3,000 people. The efforts of Datar come as a breath of fresh air in these times of masked existence. Support, by way of Al-Adil Group sponsoring air tickets and conducting free Covid-19 tests is welcome,” said diplomat Vipul.

Before boarding a flight, one Indian was in tears: “I lost my job and got no pay for two months… I had no money for the air ticket, but now I am returning home.”

Another Indian with his 32-weeks pregnant wife was among the most desperate as she could deliver anytime and he wanted the child to be born in India, and he was the lucky one selected.

However, the award-winning entrepreneur Datar rests easy on the laurels he is earning for his humanitarian services from the Indian expats in the UAE.

“As a fellow Indian, concerned with the plight of those stranded here, I am simply doing my duty, along with the Indian Consulate and Air Indiaa Many have run out of resources, so we are trying to ensure they return home as early as possible,” Datar said.

Over the next few days, over a dozen more flights are planned, to fly back more expats, including probably a few to Mumbai, depending on Indian government’s clearances.

Besides the medical tests and travel, Al-Adil Group helped provide full rations to around 50 poor and penniless labourers from Telangana who had no other resources left.

Datar describes the Kerala government as “very aggressive” to bring back Keralites with nearly 16 daily flights from the UAE where nearly 65 percent of the workforce is Indian and 90 per cent businesses also are owned/run by Indians.

The Al-Adil Group is the leading manufacturer and distributor of Indian foods and non-food items with 34 outlets selling the ‘Peacock’ brand in the Arab world and India, employing over 500 employees.

The Akola-born entrepreneur, who rose from humble beginnings when he couldn’t afford a bicycle, now zooms around in a Rolls Royce, ranking among the richest Indian NRIs, but helps poor Indian farmers by eliminating middlemen in procuring his requirements to ensure a best deal for them.

He also has been seen in events alongside top Bollywood stars like Madhuri Dixit, Karishma Kapoor, Juhi Chawla, Shilpa Shetty among many others associated with his product brands.