“There are approximately 2,000 physicians of Indian origin who practice sleep medicine in the United States and the AAPIOS is the largest ethnic group organization of sleep medicine,” Dr. Katwa told INDIA New England News. “I would like to increase the membership among the AAPIOS and help bridge the gaps between academia and private practice. I would like to do awareness of sleep medicine in India and US and help young physician to take up the relatively new specialty and make a difference in life of our patients.”

Dr. Katwa was appointed AAPIOS’s president at the organization’s 7th annual meeting held in Boston for a three-year term. Founded in 2010, AAPIOS is largest single ethnic sleep-physicians organization in the United States 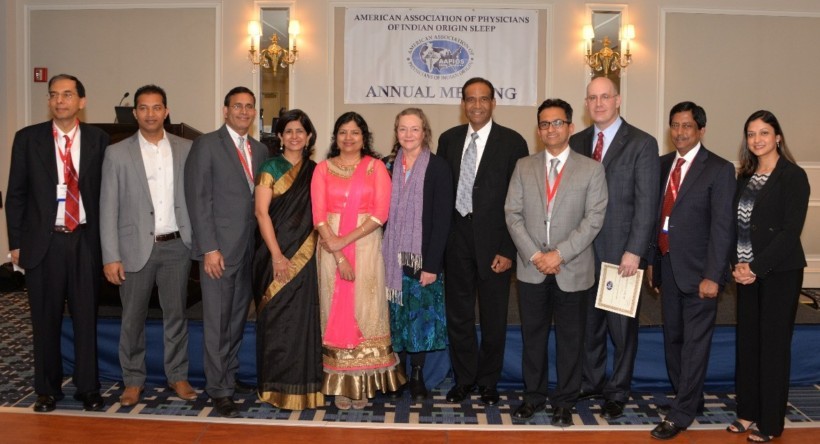 The organization focuses on the Asian-Indian population because sleep apnea affects the large number of south Asian population at a larger rate and can contribute to worsening of underlying medical conditions such as hypertension, diabetes and heart diseases, Dr. Katwa said.  It also affects quality of life and lead to decreased productivity and increased rate of drowsy driving accidents.

In addition to offering a platform and forum for interaction amongst sleep physicians of Indian origin in the United States with their counterparts in India, AAPIOS  provides networking opportunities to sleep physicians across US and the world.

At its Boston meeting, AAPIOS also elected its new executive committee. Here is a complete list of new committee members:

Chair of Board of Trustees: Narendra Kumar, MD

Dr. Katwa said that AAPIOS’s  immediate past president Dr. Anuj Chandra has helped APPIOS grow and has taken it to its new heights.

“I hope to continue the great work done by previous executive members of AAPIOS. Being in a large academic center, Harvard’s Boston Children’s Hospital, I am uniquely placed to train and mentor young sleep physicians,” said Dr. Katwa. “I would like closely work with the Indian sleep organization such as ISSR (Indian Society for Sleep Research) and ISDA (Indian Sleep Disorders Association). Many of AAPIOS members regularly conduct education seminars on sleep medicine in India to increase the awareness of screening and treatment of sleep disorders.”

AAPIOS also gave awards to a number of physicians at its Boston gala: