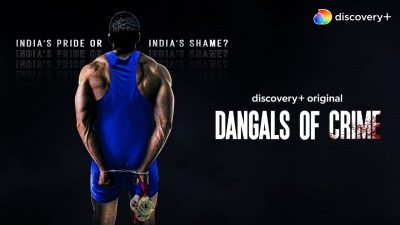 Mumbai– The investigative docuseries ‘Dangals of Crime — The Untold Truth About Indian Wrestling’, which started streaming from Friday on the discovery+ app, traces the journey of the meteoric rise of Wrestling in India and also explores in-depth, the dark underbelly of crime often associated with it.

Former wrestlers and coaches, eminent sports journalists, and law enforcement officials weigh in with their experiences, insights, and memories in the two-part ‘Dangals of Crime’.

The series deep dives into two very important aspects, showcasing how the sport of wrestling on one hand has been instrumental in bringing sporting laurels for India, but also how it has been witness to some dark moments which overshadow its glorious journey and malign the sport and its athletes.

The ‘Dangals of Crime’ features two-time Olympic medallist wrestler Sushil Kumar who is lodged in Delhi’s Tihar Jail and is being investigated in connection with a murder case.

Notably, Sushil was arrested in May last year in connection with the murder of a fellow wrestler at an academy in Delhi.

The docuseries, produced by Vice Studios Production and directed by Niyantha Shekar, also showcases the journey towards success and highlights the deep-rooted ‘akhada’ culture, strict discipline and the unparalleled devotion that goes into making a champion wrestler.