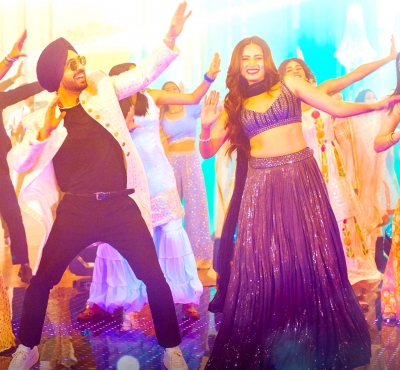 Mumbai– After the release of ‘Jogi’, actor Diljit Dosanjh is all set for his next project ‘Babe Bhangra Paunde Ne’ opposite Sargun Mehta. The actor gets candid about the latest dance numbers from the movie, ‘Koka’ and ‘Bachelor Party’

He said: “‘Koka’ and ‘Bachelor Party’ are both Punjabi numbers, and what better than bringing this just before the festive season.”

Diljit has worked in a number of Punjabi and Hindi films including ‘Jatt & Juliet 2’, ‘Punjab 1984’, ‘Good Newwz’ and others.

Sargun is also known for her TV shows and films. She was seen in ‘Crime Patrol’, ‘Kya Huaa Tera Vaada’, ‘Jamai Raja’ and also participated in reality shows such as ‘Nach Baliye 5’, ‘Comedy Nights With Kapil’. She was also part of Akshay Kumar-starrer ‘Cuttputlli’.

Now, as the actor is all set for his next Punjabi movie with Sargun, he has all the hopes that the audience will appreciate the film and its music.

“Sargun and I had a blast shooting for them. I am hoping for the audience to fall in love with these two,” he added.

The Punjabi comedy-drama ‘Babe Bhangra Paunde Ne’ is directed by Amarjit Singh Saroon and produced by Daljit Thind and Diljit Dosanjh. It will be released on October 5. (IANS)