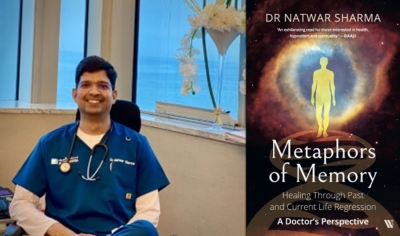 New Delhi– The physical manifestations of diseases in our present life can be linked to cellular memories from the past, including even childhood or early stages of our present life ï¿½ especially when the stored memories area negative or traumatic, says Natwar Sharma, a member of the Royal College of Paediatrics and Child Health who has trained at the Apollo Hospitals, Chennai, in his new book, “Metaphors of Memory” (Westland).

During his studies, he encountered certain anomalies for which mainstream medicine had no answer. This made him probe deeper into the cause and origin of diseases and opened his vision to alternative and holistic therapies of healing. He ended up discovering the science of regression therapy, which he combines with his practice of mainstream medicine. He hopes to bring about a paradigm shift in the field of health by bridging these conventional and non-conventional techniques of healing.

“Regression therapy delves into the sub-conscious mind to explore the link between one’s present life and that of their past. Releasing these memories and negative energies (associated with our past or this life), helps understand and articulate the root cause of a problem, be it physical, emotional or mental, bothering us and help with recovery,” Sharma explained to IANS in an interview.

“Regression is an age-old practise that is well known, but every one of us rediscovers something or other for ourselves. And as a student of science, when I was not getting the answers, I had to look for answers and that’s where the journey began. I began with scepticism and to understand if it actually works, and the journey since then has been amazing – filled with wonder as how to powerful a human mind is,” he added.

How does this work on the ground? How is it possible to access powerful subconscious patterns and unlock a curative pathway?

“This question can be better answered with the help of an example. I had a client with insomnia – meaning inability to sleep well. She told me that she is unable to sleep well for the last two years and in these two years her diabetes and hypertension have gone out of control and her doctor mentioned that sleep is very important to control diabetes and hypertension and hence put her on sleeping pills. But she was not happy with this fact that she had to take pills to sleep well.

“On questioning, she could not find out anything that was disturbing her either emotionally or psychologically. But when I took her into a trance, her mind took her back into a memory 20 years ago, when her relative had died in a car accident following which she was in shock for almost a week but recovered.

“And then another memory opened up, which was two years ago, when she was asleep and got a call from her son saying that he met an accident and his car has totalled. She was completely shocked, trembling with fear and rushed to the accident site which was not far from home. Fortunately nothing happened to her son, he was fine. But since then a strong thought crept into her mind that something bad might happen when she is asleep. And when we resolved this trauma, within a week she was able to sleep well without medications and her BP and diabetes got better,” Sharma elaborated.

“In another case, a person had developed a severe anaphylactic (allergic) reaction when munching on bhakarwadi, leaving doctors perplexed. During regression, he shared that there was, in fact, a fruit fly on his snack while he had been eating it. This could have caused anaphylaxis. But, he had completely forgotten the detail until we did the regression,” Sharma said.

At the same time, regression therapy is not a cure-all, he cautions.

“If you have a patient with kidney failure, there is no way that alternative therapy can come to their rescue. I let my patients know that. Yes, if the disease is a progressive one, it can inhibit the speed at which it is progressing,” he said.

Sharma also spoke of the long road ahead.

“Unfortunately most medical doctors don’t know what regression therapy is. And even, if a medical doctor comes across this mode of therapy, it’s looked upon with scepticism. And I don’t blame the medical fraternity for this, because the science behind regression is yet to develop and it can be nurtured with the help of well-designed studies to see its benefits. Just because science cannot prove something, it doesn’t mean that it doesn’t exist – absence of evidence doesn’t mean evidence of absence’. Hence this book is to provoke my medical community to approach it with an open mind.

“I respect their choice and I know fully well where the scepticism comes from. For most part, I never even spoke about it with others doctors. It was only three years ago that I started my own website. But, having reaped the benefits of it myself, I somehow felt it’s time to share these experiences with everyone else. My own journey has been of one that started with conviction and trust, to becoming a believer, and having great faith in it,” Sharma maintained.

This gives him reason to be optimistic.

“I see a wonderful future for people with chronic illnesses if medical science starts combining regression therapy to complement each other,” Sharma concluded.(IANS)