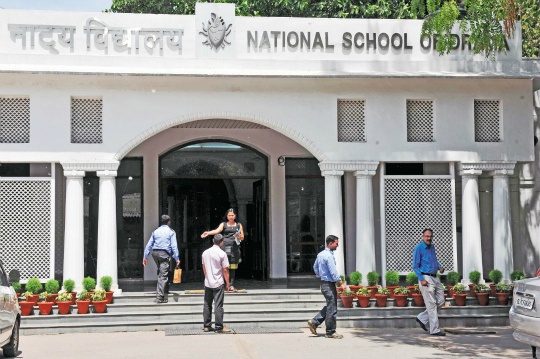 NEW DELHI–The National School of Drama, one of the foremost theatre training institutions in the world, will soon get a permanent building, Culture Secretary N.K. Sinha said on Monday.

“It’s unfortunate that a premier institution like NSD working from temporary building. To address the issue, the culture ministry has decided to build a permanent building and Rs.180 crore has been allotted in this regard,” said Sinha at the inaugural ceremony of the 18th edition of the Bharat Rang Mahotsav here.

“NSD is doing a commendable job through Bharat Rang Mahotsav of taking the tradition of Indian theatre to the global map and to preserve the cultural heritage of the country. The students of this institution have perhaps won the maximum number of Padma awards, and we are there to support it for all its endeavours,” he added.

Speaking at the occasion, eminent stage and film personality Nana Patekar said that it was homecoming for him.

“I would like to congratulate NSD for the wonderful job it is doing to promote theatre. It is great to see the response and kind of audiences, and I look forward to come back,” said Patekar who was the guest of honour at the opening ceremony.

Reminiscing about his days at the institute, actor Anupam Kher said that three years there trained him for life. “This school has taught me not only the nuances of theatre, but I learnt lot about life itself. Whenever I come back here, it is the best experience for me,” said Kher, who was a special guest at the occasion.

The festival promises to be bigger and better this year with theatre groups from over 10 countries including US, Sri Lanka, Bangladesh, China and Pakistan among others. Some of the finest names in the theatre world from India and abroad are set to be a part of the festival, and 80 plays will be staged.

Elaborating on the initiatives, NSD director Waman Kendre said that the festival will travel to Jammu, Ahmedabad, Bhubaneswar and Thiruvananthapuram this year.

“There is a need to not only experience theatre, but understand the thought behind theatre, and we are attempting to do that through this festival. It is expanding and the theme for the festival this year is ‘Rediscovering the magic of theatre’,” he said.

For the enthusiasts, NSD is also setting up a Theatre Bazar this year. It will showcase handicrafts, theatre lights, theatre books, musical instruments, Madhubani paintings, and mask making artists. A food hub with authentic and traditional cuisines from across the country will be on offer.

On the challenges before theatres, NSD Society chairperson Ratan Thiya said that globalisation is having an adverse impact. “It’s a well known fact that theatre suffers from inadequate funds. Giant market economy and globalisation is making adverse impact on it. I hope theatre of 21st century will help humankind to lead a life free of conflict and violence,” he said.

The inauguration was followed by the performance of “Macbeth” in Manipuri by Chorus Repertory Theatre directed by Thiyam.

The performances will be held at Abhimanch and Open Air Theatre at the NSD Campus along with LTG Auditorium, Kamani Auditorium and Shri Ram Centre. Tickets will be available at NSD box office and at the website http://eticket.nsd.gov.in. The festival will conclude on February 21.