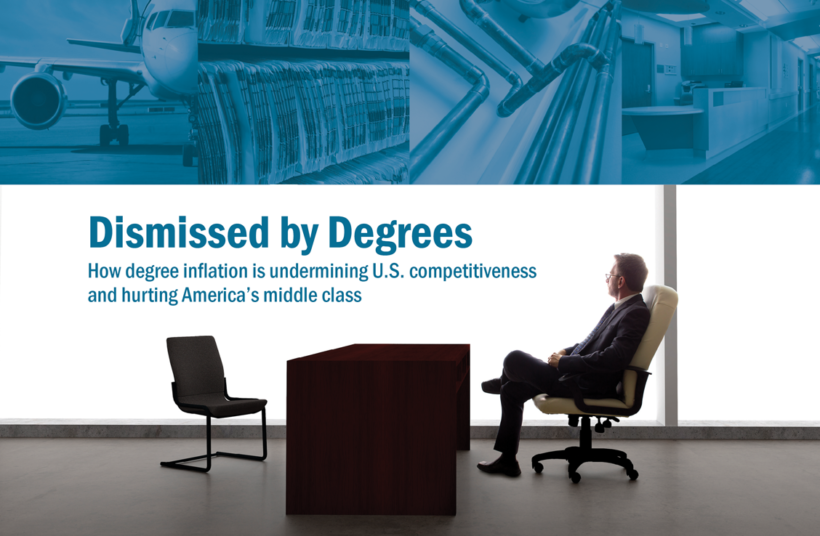 BOSTON—The Bureau of Labor Statistics reports over 12 million Americans are either unemployed or underemployed, while new research finds that 3 in 5 employers report difficulty in filling middle-skills jobs – positions that require more education than a high-school diploma, but less than a four-year college degree.

According to new research released today, more than six million middle-skills jobs in the U.S. are now at risk of “degree inflation”—the practice of preferring or requiring a college degree for jobs that were traditionally held by middle-skills workers.

The report, Dismissed by Degrees, from researchers at Harvard Business School, Accenture and Grads of Life discovered that rising demand for a four-year degree for jobs that previously did not require one not only harms U.S. businesses, but also closes off critical career pathways for millions of middle-skilled Americans. This phenomenon particularly affects Opportunity Youth – young adults between the ages of 16-24 years who are not working or in school – further constraining their ability to enter and stay in the workforce.

Degree inflation reduces the prospects for Americans without a degree to get jobs, thus limiting their access to a decent standard of living. The trend impacts positions such as supervisors, support specialists, sales representatives, inspectors and testers, clerks, as well as secretaries and administrative assistants. Those jobs were traditionally held by many middle-class Americans without a college degree. When the same job is posted today with the minimum education requirement of a college degree, it is placed beyond the reach of Americans who may not have a college degree, but do have relevant experience. In 2015, for example, 67 percent of production supervisor job postings asked for a college degree, while only 16 percent of people employed in that role had one—a “degree gap” of 51 percent.

In one of the first efforts to understand the forces underlying degree inflation and its consequences, Dismissed by Degrees surveyed 600 business and HR leaders. The survey findings show that many employers began hiring college graduates in search of higher talent quality—in both “hard” skills such as specific technical credentials and “soft” skills such as the ability to communicate or negotiate. Over time, degree inflation has crept into more and more middle-skills jobs. Many employers admit that they now pay a significant premium when they hire workers with college degrees compared with middle-skills workers doing the same job.

The survey also reveals that many employers find middle-skills workers with relevant experience equally or more productive than college graduates. Employers also report that hiring college graduates makes middle-skills jobs harder to fill and results in higher turnover and less engaged employees. In addition to the survey, Dismissed by Degrees draws on an analysis of 26 million job postings to dissect the degree gap across occupations. The analysis shows that if the current pace of degree inflation continues, 6.2 million more middle-skills jobs will be at risk as they shift to a four-year college degree requirement.

The research also found that:

Two-thirds of employers agree that requiring a bachelor’s degree for a middle-skills job makes the job more difficult to fill.

Employers generally perceive degreed and non-degreed workers in the same occupation as nearly or equally productive on many performance metrics.

“Degree inflation is corrosive to U.S. competitiveness in two ways. It slams the door of opportunity in the face of Americans with the experience to do a job or the aptitude to grow into it. It simultaneously makes it harder for American companies to find and retain affordable talent,” said Harvard Business School Professor of Management Practice Joseph B. Fuller. “The purpose of our research is not to undervalue college degree attainment, but to point out the consequences of employers relying on degrees as a proxy for the competencies to succeed in today’s workplace.”

“While talent may be equally distributed, opportunity in this country is not”, said Gerald Chertavian, CEO and Founder of Year Up and Principal of Grads of Life, a national talent pipeline development initiative for employers to work with Opportunity Youth. “This research demonstrates that by limiting themselves to hiring those with a four-year degree, not only are employers fishing in a small pond for talent, but they are paying a premium for that talent when there are millions of young Americans for whom these jobs would offer a pathway to a career that they might not otherwise have access to.”

To address the skills gap and reverse degree inflation, the report recommends business leaders should:

1. Identify which middle-skills occupations are prone to degree inflation within their organizations and industries.
2. Explore alternative proxies to a college degree. Identify the specific “hard” and “soft” skills required for critical middle-skills jobs, and develop in-house or external training programs, apprenticeships, and internships to impart those skills.
3. Evaluate the hidden costs of hiring degreed workers versus non-degreed workers.
4. Invest in strategies that help the company attract and retain workers with the right competencies rather than depending on credentials alone.

The full report can be downloaded here.