WATERTOWN, MA–Darpan, a new non-profit theater organization, will present the captivating odyssey of Emperor Ashoka of the Mauryan Dynasty that ruled South Asia circa 300 BC next month at the Arsenal Center for the Arts in Watertown, MA. 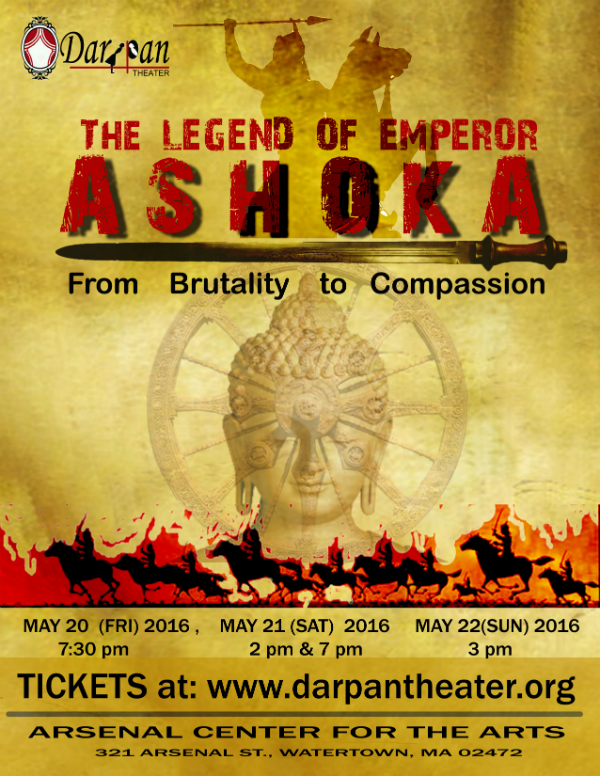 INDIA New England News:  First, tell us about Darpan. How did it start?

Anurag Jain: My wife Seema and I started the non-profit Darpan from our basement and with funding out of our own pockets because we believe that India is a treasure trove of knowledge and stories that need to be shared globally. Our desire is to bring significant stories of our “Itihas” along with contemporary stories that are quintessentially Indian that all can enjoy, through the idiom of theater.

We both love theater and performing arts and believe that the art of storytelling can also be embellished in a novel way through elements of Indian classical theater practices such as those found in Natya Shastra.   We also believe that the Indian diaspora would love to relive and know about their own glorious heritage and culture through the performing arts. Since the medium of presentation for this production is English, other generations of Indian-Americans too will get a sense of their cultural heritage and perhaps find a sense of pride, along with all sub-ethnic groups of India.

INE: What motivated you for your first production: Ashoka?

AJ: I choose Ashoka because his symbols (the 4 lions, Ashoka chakra) are integral and parts of the official seals of India- there has to be a powerful story here. The script is my own work, not borrowed, not translated from any other play. It was important to write it fresh since today in performing arts, no comprehensive story about Ashoka and the Mauryan Empire is pieced together in its entirety. The stories are presented at best in random fragments. Other factor, is that the story of Ashoka resonates globally, it has a “wow” factor in terms of some of the values that we still cherish today, of India’s “Sankriti”. Also, the encouragement from leading theater folks in India, various Indian community leaders in NE, along with Indian organizations in NE gave us the impetus to take the “plunge”.

INE: What is this play unique?

AJ: As you would have rightly guessed, this rich story and its global impact has never been presented through dramatic arts. Primarily because putting such a script together requires considerable research due to the fact that there is singular comprehensive source. So seizing this opportunity and to bring to America for the first time ever, I have put together a theatrical stage play in English that tells a complete,  yet compelling story of Ashoka right from the time of Chandragupt Maurya, to Ashoka’s motivation for Kalinga, and to his change of heart.

INE: How will Ashoka appeal to audience here?

AJ: This enthralling and mesmerizing story has great appeal to all audience. I have written the play to bring to life strong characters. Even the smallest of roles is a complete character in itself. I have carefully crafted the dialogue to evoke emotions, passion, wit, and logic. There is war, there is love.  Besides, there is potential to “mesmerize” with classical inspired dance.  Ofcourse, then there is the very significant part of Indian history, when India was a world super power.

INE: Can you briefly summarize the historic time-frame of that period?

AJ:  The time was around 300 to 250 BC in India when the glory of the Mauryan Empire on the Indian sub-continent was at its peak. Infact, India was an economic powerhouse with huge exports and sea trade. During the 300 years after the birth of Buddha, India entered a period of major socio- political, cultural transformation. During this period India saw rise in urban centers, formation of regional states and rise in local as well as global trade activities. This ultimately culminated in the establishment of the Mauryan Empire under Chandragupt Maurya. Education flourished-Taxila and Nalanda were recognized as global centers of learning and knowledge. The Mauryan Empire covered most of the sub-continent, including the fringes of the Hindukush Mountains in the west (Afghanistan), to Magdha (Bihar, India) in the east, except the tiny kingdom on Kalinga (Odhisa, India) on the eastern seaboard.  As per the records of Megasthenes, the Greek envoy to the court of Chandragupt, the capital city Patliputra (Patna) was impressive. The palace and state buildings were as grand as the palaces in Persia.

INE: What is the story of Ashoka?

AJ: Our story starts with the victory of Chandragupt over Alexander’s control and thereby signaling the growth of the Mauryan Empire. While Chandragupt expanded the geographical boundaries of Maurya, his son Bindusar establish a well-oiled central administration to govern the vast kingdom. Both Chandragupt and Binsdusar were aided by Chanakya, one of the greatest minds in statecraft of that time.  Ashoka, Bindusar’s son, took the Mauryan Empire to its height of glory. The empire was considered the richest in the known world, where trade, economic prosperity, and education flourished.

From all corners of the world as far as Greece and China, merchants came to participate in the wealth, students came to absorb the knowledge of philosophy, mathematics, and science. Interestingly, when the Mauryan flag was flying at its highest, Ashoka in a twist and change of heart completely stopped all the military expansion.  Then with the same focus and determination, spread Buddhism- the dharma of universal peace, compassion and love, across the lands as far as Japan in the East.  From conquering lands he led efforts to conquer hearts.

INE: How do you present Ashoka?

AJ: Through this performing art, we present King Ashoka’s complete journey. From his youth, to his motivations, to his trials, and to his conversation from a ruthless killing machine to a man of love and compassion. Historians have considerable consensus about Ashoka’s chronology, what he did and his adoption of Buddhism, but there are differing views of thought on his life as a person or king. In this stage play, we have taken the creative liberty to weave facts with some fiction when necessary, to bring the story to life. However, we have not deviated from the key and significant episodes.

INE: How long did it take to produce it?

AJ: By the production date of May 20-22, this will be about a year long project. I started by gathering research material and writing in early 2015. The script was ready by the end of summer 2015, it took a good six months. I then started sharing my story selectively, looking for performance space that would match our budget. With the script and performance space booked by the end of fall, I had my first reading with potential actors in early December 2015.  We started practices other and allied activities in mid-January 2016. So, this has been a slow build up, but now every day seems significant.

INE: Tell us about your team in the play?

AJ: We have several teams of people who will make this possible.  Obviously there is a team of actors. Given the subject and possibility, there are other external teams who are excited to contribute to this production. For instance, Aangikam Dance Academy is choreographing and performing classical dance pieces in this production. Then there is a visual scene which will be put together by Upasana Oddisi.  There are kind folks who are helping out for stage, lights, sound, etc. So you can imagine this is a labor of madness, some sleepless nights, anxiety and excitement.

INE: Who are the key actors?

AJ:  The play revolves around the central core of Ashoka, but there are several other key actors buttressing the core, without whom the story could not be told.  There are many characters, each complete in their own, being portrayed by eighteen actors. All our actors are locally from NE, mostly Indians, but we have white Americans and Chinese as well.  They come from all walks of life, doctors, professors, technology consultants, teachers, students, artists, scientists, and theater itself. This is all volunteer, with no equity but a shared passion for good theater.

To mention a few of the more recognizable faces in NE, Eshani Shah is coming back to stage after twenty two years. She has a poignant role that concludes the play. Then there is our prolific Sanjay Jain, who is a man of multiple talents. There are other key actors with copious acting experience and they are brilliant in the style that they bring. Also, a few who are relatively new to theater, but have a strong sense of commitment. We will try to post a blurb of each of them on our website soon.

INE: What about the costume of that era?

AJ: We did quite some research to get the look as close to what would generally work for that time period. The usual garment worn those days was called an “Antariya”, is resembles the “dhoti”. Clothing for the top half of the body was minimal. Both women and men had long hair. Men usually tied their hair in a “top knot”, covered by a turban or bedecked with jewellery. Of course, we had to work within the constraints of having little access to designers, tailors, fabric. For men, we will use dhotis and perhaps a “bundi” (short angarkha type top), and turban. For women, we would like to use ‘Amrapali” inspired clothing but within codes of “decency” today.  We will try to balance authenticity with practicality.