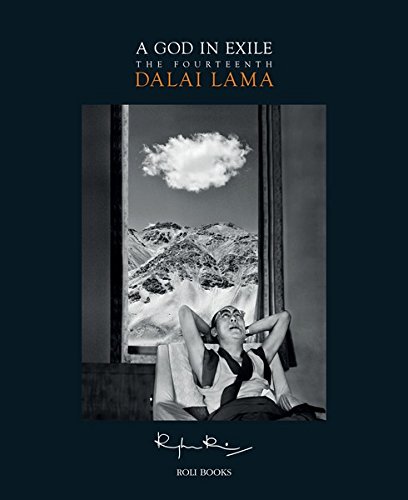 It was in 1975 that photographer Raghu Rai first met Buddhist spiritual leader The Dalai Lama in Ladakh. Rai was then with The Statesman newspaper. During the first encounter, Rai remembers, The Dalai Lama was gentle, wonderful and at ease.

Since then, and after a gap of a decade, there has been no looking back. Rai kept meeting the monk at various places and at different events and has continued capturing him and his expressions and moods for more than 30 years.

Over all these years, Rai has assembled a range of The Dalai Lama’s photographs which has now turned into a compilation. “A God in Exile: The Fourteenth Dalai Lama” is no less than a journey into the life of the Nobel Peace Prize winner through a series of photographs — all in shades of black and white.

The book begins with a brief narration by UK-based artist Jane Perkins on the life of The Dalai Lama — from his birth at the village of Taktser in Tibet to his current days in India.

Following this is Rai’s encounter with the Dalai Lama, interspersed with charming anecdotes that divide the various sections of the book. There is much humour, teasing, generous cooperation and open-heartedness.

Rai’s second encounter with The Dalai Lama was exactly after a decade, in 1985, at Bodh Gaya, where he was performing day-long preparatory rituals. Rai had to shoot from from behind the curtains as the security didn’t allow him to get closer to The Dalai Lama.

“As my camera lens parted the curtains, His Holiness suddenly looked at me, and with a warm, welcoming smile, extended his hand. I couldn’t believe it. After a brief meeting 10 years before, he remembered me. So I took his hand and kissed it,” Rai pens.

Over the years, Rai has developed a bond with The Dalai Lama beyond being the muse to his camera lens. Every time they meet, the Dalai Lama would extend his hand and Rai in turn would kiss it and the two would hug.

“As he held me close I could feel his wonderful spiritual energy pouring into me,” Rai writes.

Rai also recalls some interesting encounters. On one occasion, The Dalai Lama looked at his shirt and said: “Oh! Too many buttons.” To which Rai replied: “Your Holiness, this is a designer shirt.” The response? “Waste of buttons.”

On another day, the Dalai Lama was seated on his throne in McLeod Ganj, five or six feet above other senior lamas and rinpoches surrounding him. As Rai stood up to go to the washroom, the monk called him.

“I went right up to him. Leaning down, he said: ‘I want to see how much hair is left,’ and lifted off my hat. As he laughed, everyone around went into splits. Can you imagine? No other spiritual or political leader would do something so spontaneous during a solemn occasion,” Rai writes.

However, what makes the book stand out is not just the encounters between The Dalai Lama and Rai but the seemingly larger- than-life photographs. Every single one speaks up for itself; the monk’s expressions are captured at their best and the monochrome adds to the splendour.

The book is an absolute page-turner, and a must for those who desire to learn portrait photography — that too from a maestro like Raghu Rai. (IANS)