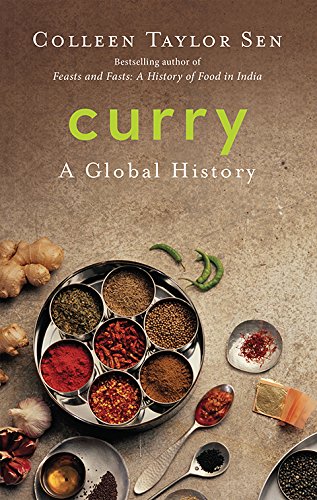 Curry, in the culinary lexicon, is intrinsically associated with the routine Indian meal. Be it fish, meat or vegetable, the dishes are primarily curry-based, which is mostly relished with rice or roti. But this culinary delicacy now has a global identity.

And Colleen Taylor Sen’s latest book, “Curry: A Global History”, explores how recipes associated with curries have evolved with time and been widely accepted throughout the world.

The book opens with a note on the global presence of the recipe.

“If any dish deserves to be global, it is curry. From Newfoundland to the Antarctic, from Beijing to Warsaw, there is scarcely a place where curries are not enjoyed,” writes Sen.

The book says that many “fanciful and sometimes hilarious explanations” are associated with the word “curry”. Sen suggests that the term has been probably derived from a southern Indian language — “karil” or “kari”. That became “caril” in Portuguese and, later, “curry” in English.

Sen mentions that, traditionally, the word was not used by Indians as they would call dishes by their specific names like korma, rogan josh, molee, vindaloo or doh piaza. Culinary experts would insist that the only dish that deserves to be called curry is the one developed in the kitchens of British India in the late 18th century.

“One of the most remarkable developments in the history of gastronomy has been the emergence of curry as an archetypal British dish,” writes Sen.

However, by the middle of the 19th century, the importance of curries in dishes was reduced with the emergence of British rule and their dishes were gradually incorporated. What also followed was the Indianisation of British dishes.

Sen goes on to write how household curry dishes started gaining identity, as Indians travelled to Britain during the 18th and 19th centuries and settled there. Veeraswamy’s, which opened in London in 1927, was the first upmarket Indian restaurant in the region.

“And the latest episode in the saga of British curry is the emergence of very expensive Indian restaurants in London with Michelin stars,” Sen notes.

Sen then moves to the US, where, she writes, the popularity of Indian recipes witnessed a rise by the end of the 1920s. Of US cities, New York has the largest number of Indian restaurants as well as the widest range of cuisines. The Anglo-Indian dish “captain chicken” is extremely popular.

However, Sen laments that the Americans are less familiar with Indian food than the British due to “lack of close historical ties between the US and India”.

From the US, Sen drifts to Canada and Australia which gradually became hubs of Indian restaurants with the steady influx of immigrants. The author, however, mentions that the food served at these restaurants is a hodgepodge.

She then traverses through the Caribbean islands, Sri Lanka, Fiji and Mauritius — all places where Indian migrant labour took their eating habits to the rest of the empire.

In Africa, particularly in South Africa, most Indian migrants were from south India and some came from Gujarat, who opened small restaurants and sold spices. The most famous Indo-South African dish is “bunny chow”, a meat curry served in a hollowed-out loaf of Western-style bread.

Even in countries like Mozambique, Zanzibar and Madagascar, spices such as cloves, cinnamon and ginger were imported from India and introduced in their delicacies. Whereas, in Southeast Asian countries, it was the Indian trader who introduced tamarind, garlic, shallots, ginger and other spices to the region.

Myanmar, where Indians comprised half the population till the late 1940s, introduced food items like Myanmarese samosas, biryani, street-side snacks, breads and curries.

All the history apart, the book is filled with recipes of curries from across the world. From Abul Fazl’s recipe for doh piaza served at Akbar’s court to “Thanksgiving turkey curry”.

In today’s scenario, Sen says, “Curry remains the global dish par excellence as people move more freely between continents, and spices and other ingredients once considered exotic are standard items on supermarket shelves.”

And, in future, “curry, the world’s most global dish, promises to remain a centrepiece of the world’s tables for many years to come”, notes Sen. (IANS)