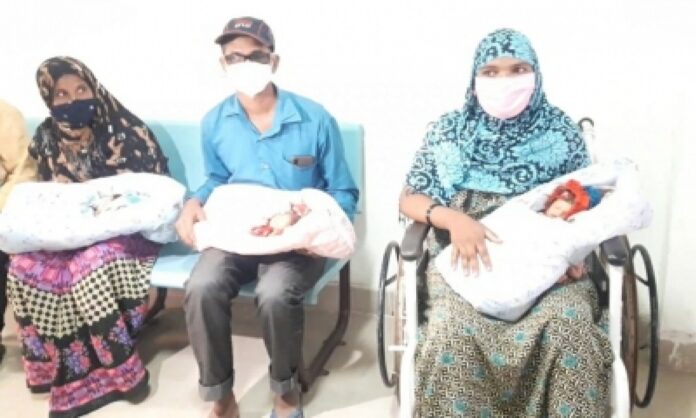 Hyderabad– A 27-year-old woman, who had tested positive for Covid-19, delivered triplets at a government-run hospital in Telangana’s Nizamabad district.

Nasreen, who had conceived with the help of assisted reproductive technology (ART), delivered two boys and a girl through a cesarean surgery on October 22.

However, this came to light only late on Wednesday when the mother and the newborns were discharged.

According to doctors at the Government General Hospital in Nizamabad, the woman was found Covid positive in a rapid antigen test on October 21. Nasreen, who was 35-week pregnant, was taken to a private hospital but she was not admitted there because of her Covid infection and premature rupture of the fetal membrane.

She was then admitted to the government-run hospital and the next day she delivered three premature underweight babies.

According to hospital superintendent Prathima Raj, it was a challenging case for the entire team of doctors as the woman, who had conceived with the help of ART after many attempts in the last four years, had not completed her gestational age and was carrying three babies.

Adding to the problems, the woman had tested positive for Covid and was brought to the hospital in the last minute.

The team of doctors took special care of the woman considering her condition and ensured safe delivery through surgery.

The team, which included doctors from departments like obstetrics and gynecology, anesthetics, general medicine and pediatric, was relieved when the babies tested negative for Covid.

Since they were underweight and had hypothermia and respiratory problems, they were kept under observation at the Special Newborn Care Unit, while the mother was isolated and treated for Covid.

However, Nasreen’s case was a challenge for them due to various complications.

The condition of both the mother and the newborns have improved during the last two weeks. Nasreen tested negative for Covid following another test on November 1.

“Proud of the medical and support staff at Government Hospital, Nizamabad, for ensuring the safety of the lady and her newborns during her delivery despite being a high-risk Covid patient,” she tweeted. (IANS)