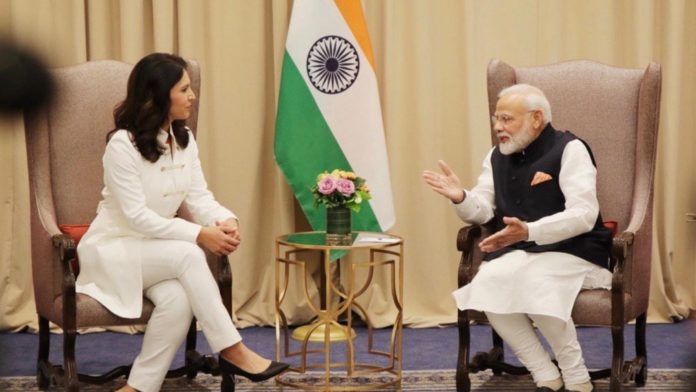 Gabbard welcomed Prime Minister Modi to the United States and they had a discussion on a wide range of issues, highlighting the importance of the long-standing relationship the United States shares with India.

“Prime Minister Modi and I had a productive conversation about the importance of the US-India relationship. India is the world’s largest democracy and one of the United States most important partners in the Asia-Pacific region,” Rep. Gabbard said. “We spoke about the need to continue to work together to address the pressing issues that impact us and the world—like combating climate change and protecting our environment, improving the economic well-being of our people, increasing trade, counterterrorism efforts, and preventing nuclear war and nuclear proliferation. We discussed the situation in Kashmir, civil rights, empowering women and addressing poverty, as well as the concern about escalating tensions with Iran.”

She said there is no place for hate, bigotry, ignorance and prejudice.

“It is important that we continue to strengthen this partnership between our two nations that has long had support from both Democrat and Republican leaders,” Rep. Gabbard said. “As we work toward mutual prosperity for our people through economic growth, science, health, the environment, security, and more, we recognize that everyone on our planet, we are all one family.”