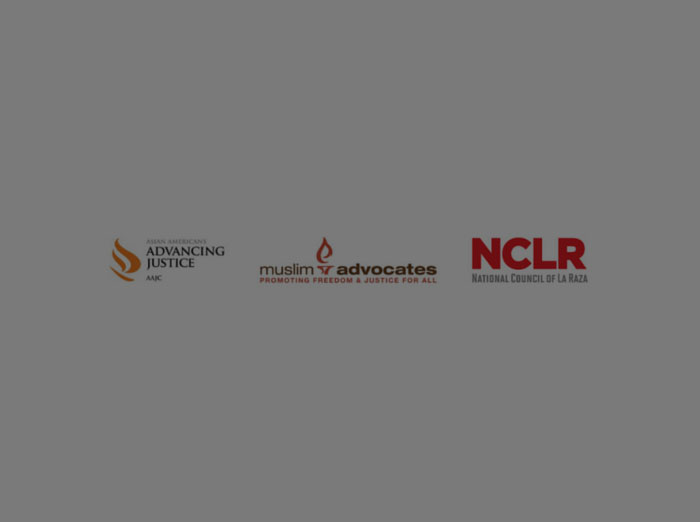 WASHINGTON, D.C.—As the 2016 campaign trail intensifies, the frequency with which many campaign events have descended into violent clashes has alarmed the entire nation. Here a joint statement issued by Asian Americans Advancing Justice, Muslim Advocates and National Council of La Raza on the toxicity and aggression emanating from presidential campaign trail:

“As civil rights organizations, we urge Americans to respond by denouncing the hostility that is poisoning our politics because, if unchallenged, attempts to divide us based on our ancestry, race, or religion will cause irreparable harm to our American family and to the future social cohesion of our country.

Those who seek to lead our country should inspire our better angels and motivate Americans to work together, not divide our communities and incite our darkest instincts. Encouraging aggression—explicitly or implicitly—toward any in our American community must be denounced and rejected. The toxic rhetoric that Donald Trump has unapologetically shouted from his podium has created an aggressive environment that has moved beyond the confines of his rallies and has seeped into our communities and our schools. Sadly, he is not the first one nor the only one, as other politicians before him have been content to stoke division and fear for personal gain, with no regard for the damage inflicted on American society.

Hateful words have deadly consequences. From teens taunting peers at a high school game, to armed predators targeting those they regard as different, we are seeing the toxic rhetoric on the campaign trail, and amplified in the media, infect the American fabric. And it must stop.

The end of February and beginning of March saw teens in Indiana and Iowa taunting competing basketball teams with chants of “Trump” and “build that wall.” Last week, in Chicago, two college students vandalized the nondenominational Alice Millar Chapel, on their own campus, spray-painting Trump’s name, along with swastikas and slurs against Muslims, African Americans, and gays. And a week ago, in Milwaukee, a man murdered three of his neighbors—Phia Vue, Mai Vue, and Jesus Manso-Perez—in front of their children, saying “you guys got to go” to one of them. These are only three of the most recent incidents, and sadly, not the only ones.

We call on our fellow Americans to reject the politics of fear and aggression, and to emulate the hundreds who gathered to honor Phia, Mai, and Jesus, holding signs reminding us that “hate speech leads to hate crimes,” or the example of the young Iowa students who spoke up against those taunts and led a constructive way forward.
We are a country that celebrates the strength of our people, that encourages Americans to engage and exercise their civic duty in a civil manner, and that fosters unity in order to collectively create a stronger, safer future for the next generation. We must carry that torch, and demand that our representatives do the same.”

Advancing Justice | AAJC works to empower AAPI communities across the country by bringing local and national constituencies together, advocating for federal policy that reflects the needs of Asian Americans, and empowering Asian Americans to be able to fully participate in our democracy. Ensuring that we have three fully functioning branches of government is essential to that work.

Muslim Advocates is a national legal advocacy and educational organization working on the frontlines of civil rights to guarantee freedom and justice for Americans of all faiths. Through high impact lawsuits, policy advocacy, and community education, Muslim Advocates serves as a resource to empower communities and ensures that the American Muslim community is heard by the courts and leaders at the highest level of government.