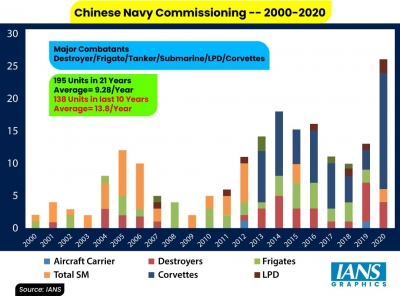 New Delhi– Jon Huntsman, the US Ambassador to Russia, post landing on the USS Abraham Lincoln on April 23, 2019 had remarked, “Each of the carriers operating in the Mediterranean represent 100,000 tonnes of international diplomacy.”

Exactly two years later, on April 23, 2021, the Chinese Communist Party (CCP) Navy demonstrated its own capability of naval military diplomacy when, on the same day, it commissioned a Type-55 Renhai-class cruiser, a Type-75 Landing Helicopter Deck and a Type-094 SSBN with a cumulative tonnage of 70,000 tonnes.

The statement of intent is clear.

Discarding its continental mindset, China, the second largest economy in the world, aims to be a global maritime power of the magnitude of the British Empire in the late 17th/18th century and the United States in the 19th/20th century.

The rate at which the CCP Navy has been inducting new warships has been the cynosure of many world navies. Between 2000 and 2020, the CCP Navy commissioned a staggering 195 major combatants such as destroyers, frigates, tankers, submarines, landing ships and corvettes.

More astounding is the fact that 138 of these were inducted into service in the last 10 years at an average of 13.8 per year, with 26 platforms being commissioned in 2020 itself.

Whether it be through reverse engineering or licensed production or cyber espionage or through outright copying, the feat is truly remarkable by any account.

Sometime between 2015 and 2020, the CCP Navy also crossed a critical threshold. It fielded more warships than the US Navy, making it the world’s largest navy numerically.

Today, at around 360 hulls, it exceeds its American rival by more than 60 warships and the gap continues to grow rapidly.

Add to it the two other maritime forces — the Coast Guard and Maritime Militia — and the CCP Navy in total has over 700 ships even by conservative accounting.

While there was been some scepticism with regard to the combat capabilities of CCP Navy assets, the new generation platforms, like the Type-55 Renhai class, are technologically similar to the latest being inducted by Western Navies and are likely to be the mainstay of the CCP Navy’s Carrier Strike Force as well as distant operations task groups.

Anyway, the numbers too do matter sometimes, especially if one is to contest in the dense combat environment in the littoral waters of South and East China Sea.

So, borrowing the tagline of the popular Discovery Channel series – ‘How did they do it’?

It all started in the 1980s and 90s when the CCP famously ‘opened up’ all defence manufacturing sectors to civilian production.

This resulted in sudden mushrooming of smaller and medium-sized shipbuilding enterprises, all vying for the lucrative global market. At one time in 2013, China had more than 800 shipyards and a large number of dry docks.

In comparison, matured players like South Korea had only about 20 shipyards. This unprecedented growth, pushed by the senior most leadership of the CCP, has seen the shipbuilding industry in China grow by 13 times between 2002 and 2012.

Trouble began after the 2008 global financial crisis, which resulted in a sudden downturn in demand for shipping. As a result, most of the Chinese shipbuilding enterprises were operating at drastically lower capacities.

This is when the CCP decided to step in to protect its shipbuilding industry and started giving government contracts for warship production to some of its preferred yards.

This resulted in the sudden spurt in warship production, primarily due to China’s socio-economic necessities rather than its operational requirements.

As mentioned earlier, the period between 2013 and 2020 witnessed a meteoric rise in warship production. Such a rise in force levels surely met CCP’s geo-strategic agenda too.

The CCP Navy is likely to become a 4-carrier Navy by the end of this decade and could have 10 carriers by 2049.

Presently, they appear to be focusing on integrating their aircraft carriers and the associated carrier battle groups (CBG) with their fighter squadrons. And it’s not just the numbers, even the speed of construction has been astounding.

Just to put it into perspective, while the Indigenous Aircraft Carrier or IAC-1 of the Indian Navy was launched in 2013 and is still undergoing trials, the CCP Navy launched its first domestically built carrier, Shandong, in 2017, and commissioned the ship in 2019. Such rapid buildup of ships has never been seen since the end of World War II.

This barrage of Chinese ship construction has great potential implications for the CCP’s efforts to coercively envelop Taiwan, resolve other sovereignty disputes in its favour, carve out regions as zones of exceptionalism to international rules and norms, and project Beijing’s authoritarian power and influence around the globe, especially in the Indian Ocean.

What all this brings out quite starkly are four critical issues.

First is the need for India to similarly build-up its own Navy in strength. There is an urgent need to address the shortfall in numbers of major combatants and fleet-support ships.

While it is true that over 45 warships are currently being built in the Indian shipyards, the rate of production is painfully slow and as a consequence, the numbers may not be enough in the available time before a possible scenario wherein Indian Navy is pitted against the CCP Navy in the Indian Ocean.

Another matter of concern is with regard to the naval budget. Although India continues to be active in the Indian Ocean Region, it continues to spend far too little on its navy compared to its peers and competitors.

This under-allocation means that the Indian Navy could barely cover its planned expenditure, leaving no money for new purchases or further modernisation. The resultant shortfalls in terms of capable surface combatants, submarines, surface and aerial surveillance assets, anti-submarine capabilities etc. mean that India is less capable of deterring China.

It also brings into focus the need for three aircraft carriers to safeguard national maritime interests within our areas of interest, against the backdrop of changing geo-politics in the Indian Ocean Region. Carrier Battle Groups are our primary source of power projection and provide the Navy with freedom to manoeuvre.

Three aircraft carriers would arm the Indian Navy with the required teeth to deter our potential adversaries from any misadventure, as well as to establish credible deterrence.

And finally, the most important aspect that needs immediate attention from the policy makers is with respect to the slow pace of naval shipbuilding in India, especially those related to complex weapon platforms.

There is a need for the government to accept the capacity limitations of the defence public sector undertakings and encourage private players.

Akin to the Chinese model, greenfield yards in the country may be encouraged to either build relatively low-end platforms so as to free-up capacity in the more established defence shipyards, or to take up construction of major surface-combatants themselves.

There is an enormous scope for private players in the national effort to ramp up the numbers in the Indian Navy’s destroyer and frigate holdings.

It is also imperative that, akin to the Chinese, Indian policy makers show the intent and invest capital into the indigenous ship-building industry to ensure that the skilled manpower and captive infrastructure remain as a well-oiled unit.

In the interim, the Indian Navy will have to rely upon its superior training, well-oiled strategy and nimble-footedness in terms of use of the available resources to keep the CCP Navy at bay. (IANS)