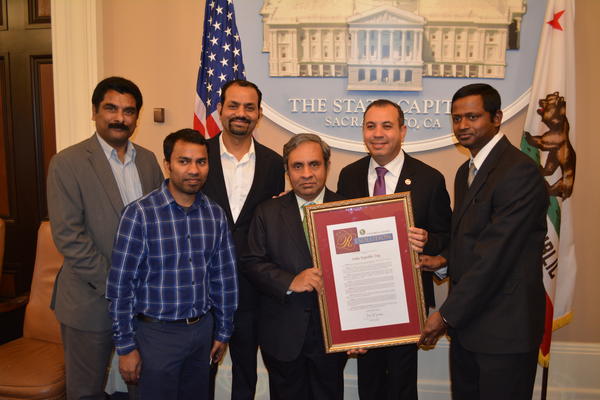 SACRAMENTO–For only the second time in California history, the State Senate and State Assembly have adopted a Senate Concurrent Resolution (SCR) declaring January 26th as “India Republic Day”, recognizing the contributions of the Asian Indian American community to California.
A special ceremony was held on the Senate Floor featuring the Republic of India Consul General and Asian Indian American dignitaries from throughout the state. 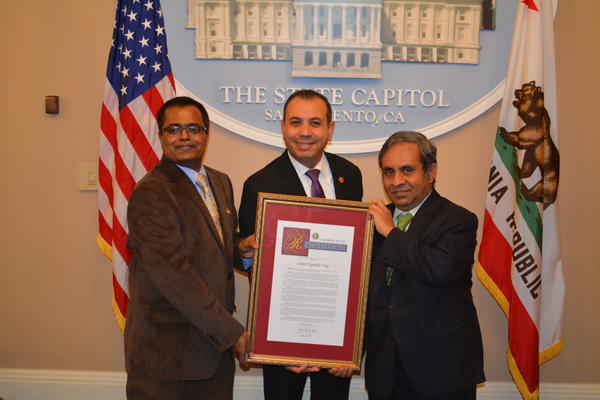 “Today, the California Legislature joins the people of India and Asian Indians throughout the world to celebrate Republic Day and pay tribute to India’s constitution, its thriving democracy and vitality,” said Senator Tony Mendoza. “It is important to recognize the significance of this day as well as the contributions of the Asian Indian American community to the diverse fabric of California.”

SCR 91 by Senator Tony Mendoza (D-Artesia) observes January 26th, 2016 as “India Republic Day” and urges all Californians to join in celebrating this historic event. The resolution recognizes the history of Republic Day, noting that on December 31st,1929, Indian nationalists unfurled a new flag and pledged that every January 26th thereafter would be celebrated as Republic Day. India achieved its independence in 1947 and declared its allegiance to a new constitution which went into effect on January 26th,1950 and served as the democratic governing document for the nation. India Republic Day celebrates these tremendous achievements.

India Republic Day provides an opportunity to reflect on the many achievements of this vibrant community in California. More than 536,000 Indian Americans reside in California, contributing to its culture and society through achievements in food, medicine, business, and technology.

“I thank the Indian Consul General and the Asian Indian American community of California for sharing the joy of this wonderful day with us, for reminding us of its significance, and for their dedication to core community values of family, service, knowledge and peace,” said Senator Mendoza.

“We thank the California State Senate and Senator Tony Mendoza for joining in celebrating the 67th Republic Day of India. We are confident that the already strong ties in technology, trade, culture and education, as well as people-to-people contacts, will be further enriched and enhanced in the future,” said Republic of India Consul General, Ambassador Venkatesan Ashok.

Republic Day is the most popular of all the national holidays of India and serves to remind the world that the foundation of any nation is in its people, in their spirit and courage in the face of adversity, and their willingness to sacrifice in the pursuit of freedom and liberty.