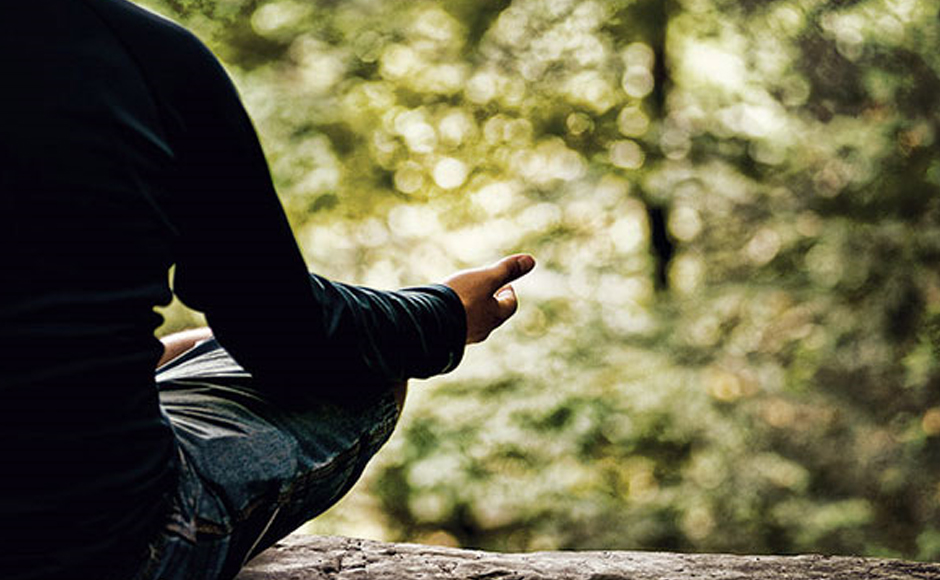 “It was totally transformative,” said Banerjee of the eating meditation exercise included in a mindfulness

program sponsored by Harvard’s Center For Wellness. Banerjee, a doctoral student in the English Department, said that devoting all her energy to “the sensation of tasting” helped her disengage from her stress, focus on the connection between her body and her mind, and maximize the pleasure of chocolate.

“It was so amazing,” said Banerjee, “because it just connected me to this world of potential happiness that is always around me if I just take something I like and really focus on it.”

Less stress can lead to a happier, more productive life, and research says meditation can help you get there.

In 2011, Sara Lazar, a psychology instructor at Harvard Medical School, released results of a study that showed that eight weeks of mindfulness meditation actually produced changes in brain regions associated with memory, sense of self, empathy, and stress, where more or less in reserve can make a big difference in exams, presentations, and dissertations, as any scholar knows. Thanks to a range of Harvard programs, grad students and undergrads have myriad ways to take a deep breath and relax.

With support from a recent anonymous gift, the Center for Wellness at Harvard University Health Services sponsors several meditation options, including four-week courses based on a mindfulness curriculum specifically geared toward college-aged students, 20-minute drop-in sessions at the Serenity Room at Grays Hall, and weekend and weeklong retreats.

“The retreat experience can be very powerful and wonderful, but then having something that students can attend for four weeks helps them maintain their practice or stay connected to other students,” said Jeanne Mahon, director of the Center for Wellness.

This year, nearly 400 Harvard students took part in either the meditation classes, based on the Koru Mindfulness curriculum developed by two Duke University psychiatrists, or the retreats, which are run by Inward Bound Mindfulness Education. Among them was junior Jarrod Wetzel-Brown.

An English concentrator on a pre-med track, Wetzel-Brown signed up for a weekend retreat in October as a way to “take a step back and reflect a little bit on myself without having every facet of society blaring out loud in front of me.”

The retreat was held at a conference center on the edge of a pond nestled in 500 wooded acres in Charlton, Mass. Walks and meditation sessions filled the hours; silence ruled. Once he’d adjusted, the absence of conversation proved freeing, said Wetzel-Brown.

“Not having to devote the energy to think about what to say next … was a very liberating and powerful thing.”

Back on campus the Winthrop House resident has made meditation and regular walks part of his weekly routine, and has noticed a renewed sense of self.

“The major thing I have taken from it is this awareness … I know that I have an existence outside of the classroom again, and I think that’s something that I forgot.”

Banerjee, who turned to one of the four-week student meditation programs to help her cope with the stress of working on a Ph.D., said she “liked the idea of being obligated to go somewhere for a few weeks and to make a commitment and to find multiple strategies.”

She and about 10 students met once a week at Dudley House, where they practiced different types of meditation and discussed incorporating the practice into their daily lives.

“It extended my sense of what meditation could be,” said Banerjee. “Every single day I am doing it, it’s really had an impact. My life has become much richer.”