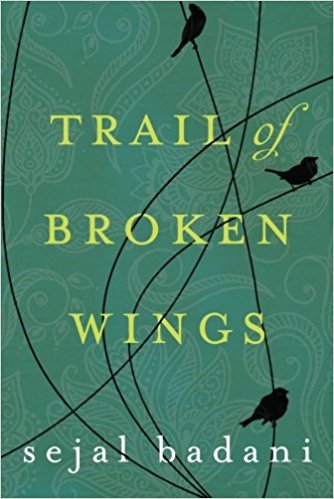 At a time when sordid tales of sexual abuse and wanton chauvinism emerge from Hollywood and other locations, Sejal Badani’s “Trail of Broken Wings” turns the spotlight on how one cannot always view one’s home as a safe sanctuary.

While the Harvey Weinstein saga of abuse has exposed the potential perils of the professional space, Badani, through her novel, speaks of how the four walls of a home can also represent a cage of melancholy and sadism and the roof a thick sheet of sheer oppression.

The book captures the lives of three sisters of Indian origin in America. They have lived their respective lives with a morbid secret buried deep within. As the pages flip, the secrets slip out — perhaps at a slow pace, especially for someone looking for a quick read — long after Badani starts off the story with their father, Brent, slipping into a coma.

Sonya, who has left home at an early age to escape the abuse — both psychological and physical — meted out to her by her father, is called by her mother Ranee to help her tide through the rough time.

Trisha, the youngest daughter — and to the rest of them the father’s pet — is “happily married to Eric, who insists on having children.”

She is also carrying a burden of her own, having seen her sisters suffer both physically and mentally at the hands of their father. But that is not all and there is a secret she has not let out to her siblings.

Marin, the eldest sister and also the most disciplined and successful among the three, too carries within her the seeds of woe — the emotional scars of a near brutal relationship with her father, whose beatings she managed to avoid only by becoming perfect at what she did.

Through the pages Badani weaves in triggers for each of the characters, which add to the twists as well as help build layers of vulnerability around the key characters, including that of the mother Ranee.

For Sonya, it’s a return to a horrid past which she had abandoned for a no-strings-attached existence. Eric’s nagging insistence for a child and slighting of Trisha over the issue breaks her down and makes her dig into her suppressed conscience, making her open up about the time when her father raped her — a fact not known to any of them.

Marin, on the other hand, who has suffered physical abuse at the hands of her father, comes to terms with it when she learns of the physical violence against her teenaged daughter Gia by her boyfriend and the fact that the girl is not resisting the assaults.

But it is the mother’s radical decision, after years in duress-filled marriage, which lends a sense of steely body to the narrative of collective angst of the three sisters.

Recounting Ranee’s role, however, would be unfair and would take away from the read, rather than add to it.

Each chapter is dedicated to individual stories and the perspectives of the four key characters. Despite the slow pace of the book, it churns out a significant level of curiousity and anxiety, if you are equipped to handle the gloom.