The former Union minister also disagreed with Vice President Hamid Ansari that there was absence of “emotional unity” among Indians before the advent of colonial rulers. 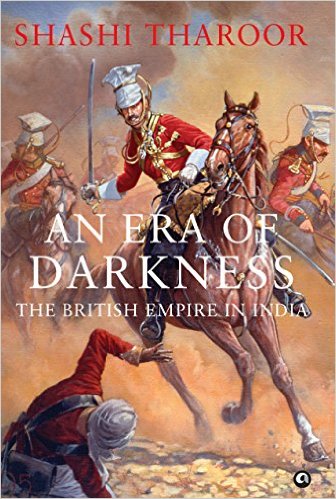 Speaking at the release of his (Tharoor’s) book “An Era of Darkness – The British Empire in India”, the Congress MP said the British have only “portrayed one-sided vision of the colonial rule” so far.

Releasing the book, Vice President Hamid Ansari said: “Famine, forced migration and brutality were principal characteristics of the colonial rule in India,” and added these were three examples of why British rule over India was “despotic and anything but enlightened”.

The Vice President, however, wondered: “But, is this not the story of all colonial and imperial ventures in history?”

“Was there an India as a cohesive entity before the advent of colonial masters” Ansari asked, and then himself replied that an answer to this question would help understand the process by which the British succeeded.

“We need to accept that there was, in that initial period, no India — politically or emotionally,” he said.

Later, interacting with TV anchor and columnist Karan Thapar, Tharoor disagreed with the Vice President on the point of absence of emotional unity amongst Indians.

Tharoor argued that both schools of thought — the Hindus and the Muslims — suggested that there was enough “emotional unity” in different parts of India.

In this context, Tharoor referred to the visit of Adi Shankaracharya to various parts of India — from south to north and from Gujarat to Puri in Odisha. Similarly, the Congress MP said Indian Muslims during their Haj always jointly identified themselves as belonging to the “Hind”.

Congress MP said Britain should tender an “apology” to India for their brutality and also teach British children the true history of the “horrendous” colonial rule in India.

Tharoor, also a former UN diplomat, said: “After all, the beauties of the cities like London were built by the resources taken away from India,” and added: “The loot in fact was extensive.”

Tharoor alleged the past colonial masters have destroyed the textile industry in Dhaka and also carried out the same formula with the steel and shipping industry in south India, which was far superior than that of Britain.

On the apology issue, the former Union minister, however, said he is not expecting the “apology” from British Prime Minister Theresa May, who is arriving in India on November 7.

“It is a co-incidence that the book is being released today, just two days before the arrival of the British Prime Minister,” Tharoor aded. (IANS)