WALTHAM, MA—Indian America classical music community in Boston, which was stunned by the sudden death of Dhrupad Maestro Ramakant Gundecha in India, will host a ceremony on Nov. 17 in Framingham to pay a tribute the Indian musician.

He was closely associated with Waltham, MA-based LearnQuest Academy of Music.

“Gundecha Brothers have been associated with LearnQuest for more than two decades. The Indian Classical Music community in the Boston area is stunned by the news of Ramakant Ji passing away,” said Pradeep Shukla, president of LearnQuest Academy of Music. 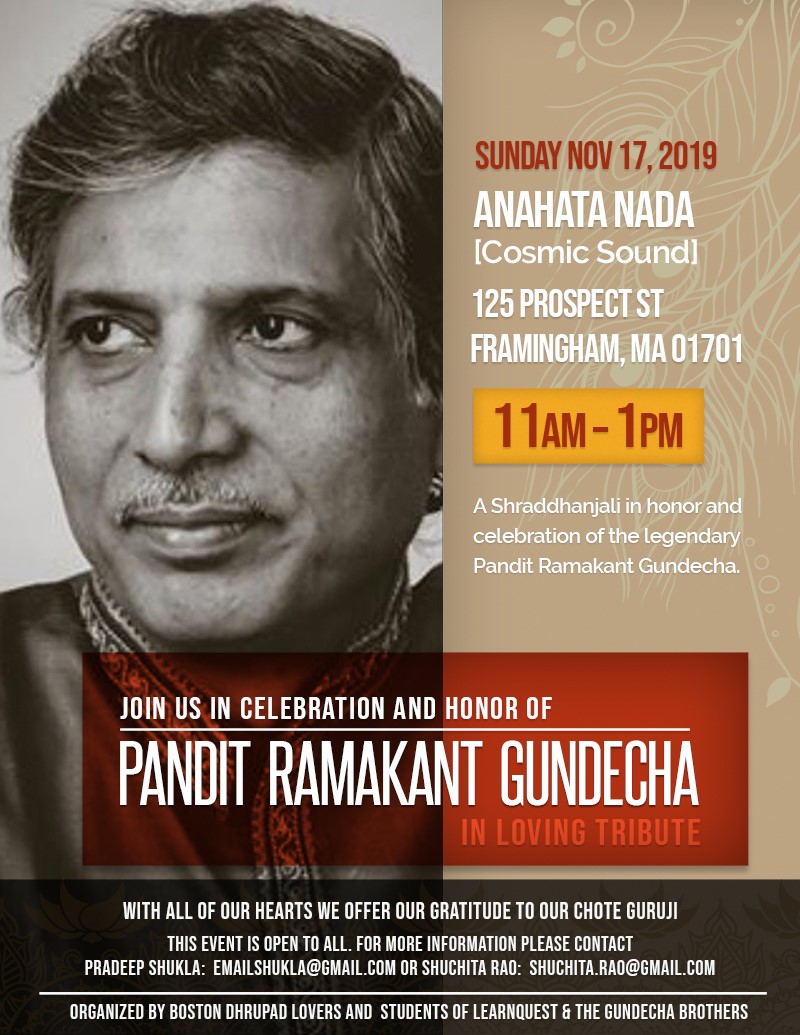 “They have a very special place in our hearts. Ramakant Ji, an eminent Dhrupad performer and passionate teacher, whose mission was to revive and spread Dhrupad music all over the world will be missed by all of us here and Dhrupad lovers all over the world,” said Mr. Shukla.

Ramakant Gundecha, the younger of the Gundecha brothers duo, passed away due to a heart attack on the evening of Nov. 8. He was 56. He suffered from chest pains while waiting at the Habibganj Railway Station to board a train to Pune and was rushed to a hospital. However, according to a report in The Hindu, his younger brother, pakhawaj player Akhilesh Gundecha said that he died in the ambulance.

The Padma Shri awardee’s older brother, Umakant Gundhecha was travelling with him. The trio had performed at the Vishwa Rang – Tagore International Literature and Arts Festival in Bhopal a day earlier and had also attended a session at the event on the morning of Nov. 8.

The Gundecha brothers, founders of Bhopal’s Gurukul Drupad Sansthan, are known for reviving and performing the dhrupad, one of the oldest forms of Hindustani music. The brothers were awarded the Padma Shri together in 2012. Practitioners of the Dagarvani style of dhrupad, they trained under stalwarts, Zia Fariddudin Dagar and his brother Zia Mohiuddin Dagar.

The duo has performed at countless festivals and concerts across national and international platforms and was also awarded the Sangeet Natak Akademi award in 2017.