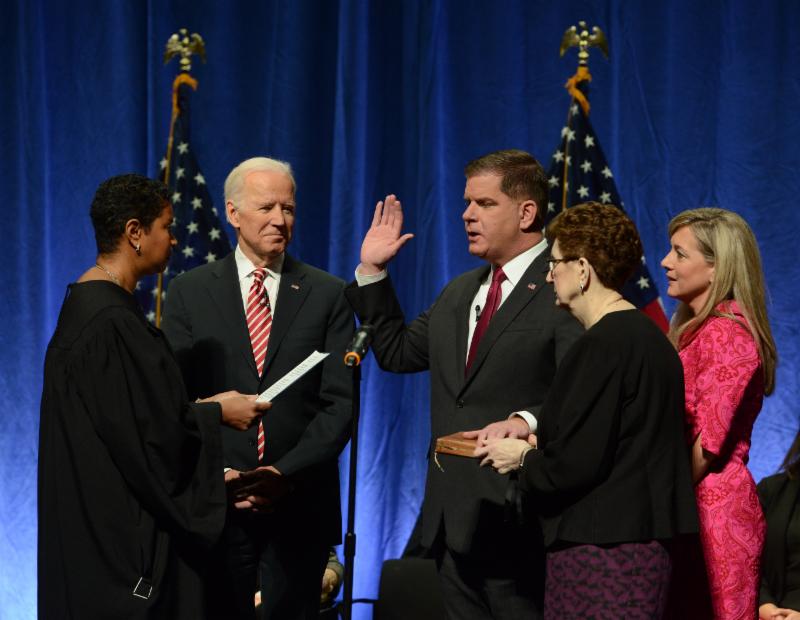 BOSTON – Boston Mayor Martin J. Walsh on Monday took the oath of office and was sworn into his second term as Mayor of the City of Boston before a crowd full of residents, supporters, faith leaders and elected officials at Cutler Majestic Theatre.

With former Vice President Joseph R. Biden Jr. presiding, the ceremony also included the swearing-in of the Boston City Council. After his swearing-in, Mayor Walsh delivered his second inaugural address, committing to prioritizing the fundamentals of middle class opportunity: strong 21st century schools, good jobs, and affordable homes in safe neighborhoods. In his speech, Mayor Walsh further committed to securing resources for Boston’s most vulnerable populations and providing more opportunity in every neighborhood across the city.

“In the last four years, we have dedicated ourselves, together, to Boston’s progress,” said Mayor Walsh. “And as we’ve proven to each other, our nation, and the world, Boston never stops rising to the occasion, setting new goals, tackling new challenges and soaring to new heights. I’m honored to stand alongside this city’s residents and have the opportunity to continue our work of making Boston a shining example — our shining city on a hill — of all people coming together to make their neighborhoods and their city better each day, year, and generation. We all share the same conviction that we are always moving forward towards a better Boston, and I’m so proud to be a part of it.”

“It was an honor to preside over Mayor Walsh’s swearing in,” said Vice President Biden. “Marty is a man of incredible character and courage. He has never forgotten where he comes from. I don’t think there’s a Mayor in America who better understands the middle class, or who will do more to fight for its revitalization in the years ahead than Mayor Marty Walsh. Building on the work that the Mayor and the City Council have already done, the future is bright for the City of Boston.”

Reverend Joseph White of St. Joseph Catholic Church delivered the ceremony’s opening prayer, and remarks by Vice President Joseph R. Biden Jr. preceded the inaugural address before he presided over the administration of the Oath of Office of both Mayor Walsh and the Boston City Council.

In his address, Mayor Walsh announced his Administration’s plans as he begins his second term, including:

Four years ago, Mayor Walsh committed to working towards eliminating the opportunity gap throughout the City of Boston. When he came into office, Mayor Walsh created the Office of Workforce Development, with Career Centers serving more than 380 employers and 15,000 job seekers annually with resume-writing, networking, interviewing and job searching skills. A year later, Mayor Walsh established The Office of Financial Empowerment which works to equip residents with the knowledge, tools, and resources to be financially secure and create wealth.

Since 2014, Boston has directed $11 million in new development fees to job training for 3,000 low-income Boston residents through various job training and employment placement programs in a number of high-growth sectors. The city’s unemployment rate dropped from an average of 6.1 percent in 2013 to 3.4 percent in 2016. • Building on Mayor Walsh’s commitment to strengthen and diversify the talent pipeline in Boston and provide opportunities for all, Mayor Walsh today announced the launch of Boston Hires.
• Working in partnership with nonprofit partners and private employers, the Boston Hires campaign is aimed at getting 20,000 low-income Boston residents trained and placed in good-paying jobs by 2022. To accomplish this, Mayor Walsh is leading by example by committing to train and place Boston residents and Boston Public Schools graduates in good paying city jobs through a new program specific to municipal work, City Academy. Boston Hires will begin recruitment and info sessions for its first cohort of 57 individuals in February 2018.
Working Together to Help the Homeless Population

Creating additional permanent supportive housing is an important component of Boston’s Way Home, Mayor Walsh’s plan to end chronic and veteran homelessness. This type of housing combines subsidized rental housing with individualized services that people need to become stable in their housing.
To date, Boston has created 4,514 permanent affordable housing units for homeless individuals. These units have been created through subsidy programs targeted to homeless individuals and through City requirements that rental housing developments with ten units or greater include a set-aside of at least 10 percent of those units for homeless families and/or individuals. In addition, the Boston Housing Authority gives homeless households priority for housing in its portfolio.

Building on Mayor Walsh’s commitment to end chronic homelessness in the City of Boston, Mayor Walsh  announced the establishment of the Boston’s Way Home Fund, which will support the City of Boston’s plan to end veteran and chronic homelessness. The fund will raise $10 million in private funds in order to to create 200 new units of supportive, sustainable, long-term housing for chronically homeless men and women over the next four years. The fund has been launched in partnership with Pine Street Inn and Bank of America. Bank of America will assist with the banking mechanisms, while Pine Street Inn, as a registered 501 c(3), will hold the funds in a restricted account.

As Boston’s population continues to grow at historic rates, with an anticipated 700,000 residents who will live in Boston by 2030, Mayor Walsh and his administration continue to create housing for all income levels. Boston’s housing plan, Housing a Changing City: Boston 2030, set out to create 53,000 new units of housing across a range of income levels by 2030. Since the 2014 implementation of the plan, 13,551 new units of housing have been completed.

With an additional 8,412 units currently under construction, the City has secured housing for an estimated 25,000 residents, making significant progress in meeting Boston’s rapid population growth. By improving the development and the permitting process; by raising affordable housing requirements; and by investing directly in affordable housing; Boston is ahead of pace to meet that goal, and rents have stabilized.

• Recently, Mayor Walsh joined mayors from across the Greater Boston area to commit to a regional housing plan. By March, the coalition will announce the number of new homes the region needs. The partnership will address the housing needs of the Metro Boston area, with a focus on housing production, diversity, cost, location, design and increasing stability for the region’s residents. The partnership will create a regional work plan, which will establish a regional housing production goal, along with specific strategies to achieve that goal throughout the 14-community region.The group will also recommend changes to zoning, local policies, funding calculations for state aid toward public schools, and other tools each city and town can use to help address the housing affordability crisis together. Working as a regional team, the group will also be able to respond faster to residents in crisis, finding resources and taking action to provide direct assistance.
• As a leader in this strategy, the City will increase the Boston housing plan’s targets for low-income homes, moderate-income homes, senior housing and overall units.
Investing in Recovery Services

Dedicated to providing recovery services to all those that need it, Mayor Walsh created the first-in-the-nation municipal Office of Recovery Services to study substance use in Boston and lead the city’s strategy around substance use disorders, addiction and recovery. Along with launching the new 311 for Recovery Services 24/7 hotline support system and investing in outreach workers on the streets, Mayor Walsh this year piloted a daytime engagement center for homeless individuals that hosts programming and access to medical, recovery, housing and job search services as a new, innovative way to increase access to critical support.

In 2014 to ensure public safety, Mayor Walsh made the decision to close Long Island Bridge. Over the past four years, the City has worked diligently to replace all shelter beds that were once housed on Long Island and continued to add more. While Mayor Walsh believes that the location is not suitable for Boston’s homeless population, he has always been committed to recovery services being part of the future of Long Island and saw the potential the location had to be a peaceful setting for those in recovery. Rebuilding the Bridge and then reopening the Island for recovery services continues Boston’s commitment to ensuring a continuum of care for those who suffer from substance use disorders.
• As part of Mayor Walsh’s commitment to creating more recovery supports and services, Mayor Walsh today announced his Administration will rebuild the Long Island bridge, and allow Boston to invest in a comprehensive, long-term recovery facility on Long Island.
• Boston will be able to offer essential recovery resources in a serene setting, and provide services spanning the whole continuum of care such as harm reduction, detox, residential treatment, transitional housing and ongoing peer support. The City will develop a funding plan and seek necessary permits for the bridge, and plans to follow the planning and permitting process with construction of the bridge. Estimated construction costs for a replacement are approximately $40-$100 million, depending on design. Partial funding for the bridge is already contained in Boston’s fiscal year 18-22 Capital Plan, and the City projects to have over $30 million available from the Parking Meter Fund around the time construction could begin. The bridge will likely be similar to the old bridge, with one lane in each direction, and sidewalks, as well as an open channel for boats below. City engineers will update the design and materials from the original 1951 bridge to ensure a longer-lasting structure.