Author Samuel Butler once observed that “to die completely, a person must not only forget but be forgotten, and he who is not forgotten is not dead”. By this standard, well alive even after 2,000 years is this first century Roman Emperor and philosopher, whose seminal work was a favourite of US President Bill Clinton in his eventful tenure, figures in iconic novels of John Steinbeck and Indian bureaucrat Upamanyu Chatterjee, and appeared on the best-seller list even in 2002.

And then scholars have compared this philosophical work to other, distant traditions including a fair bit of Hindu tradition as enunciated in the “Upanishads” and the “Bhagavad Gita” as well as Buddhism. 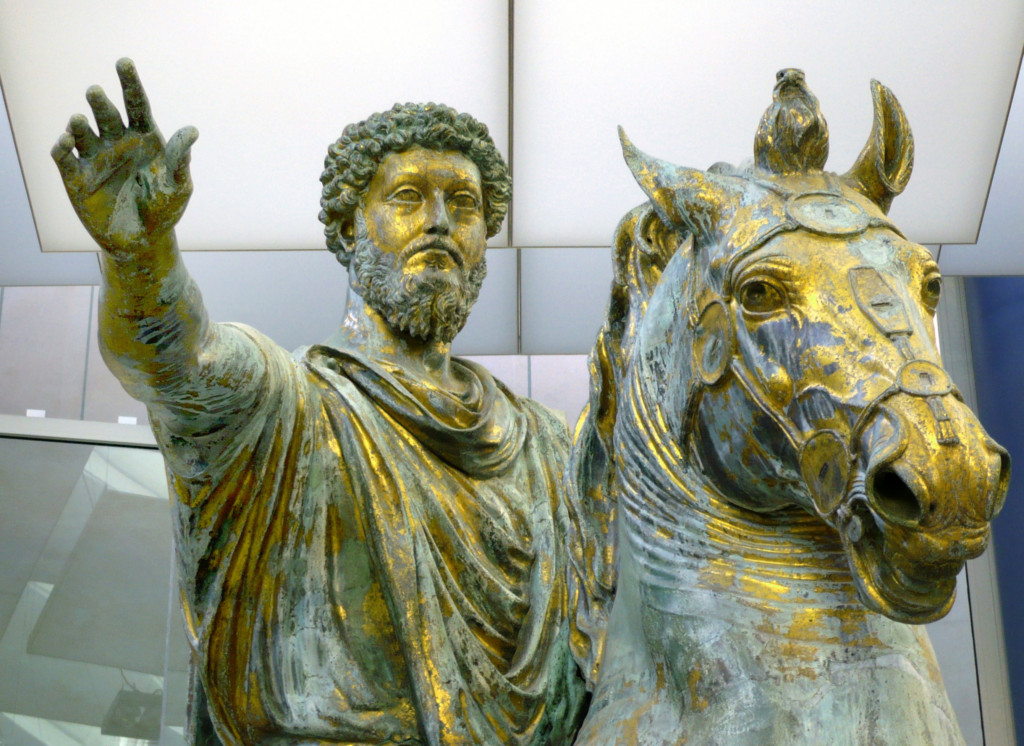 Marcus Aurelius (121-180 AD; reigned 161-180) may not have the flashier appeal of other classical Greco-Roman figures such as Alexander the Great, Julius Caesar or Cleopatra, but is among the capable ones being both a diligent and effective ruler (he was last of the “Five Good Emperors” in the first century, all of whom were not biologically related and proved to be enlightened rulers) as well as one of the leading exponents of the Stoic school of philosophy.

More importantly he is also one of the few whose mental processes we can gauge – courtesy a series of personal writings compiled in 12 ‘books’, of his private notes to himself for his own guidance and self-improvement as well as ideas on Stoic philosophy. These are known as “The Meditations” – it is unsure that he ever intended that they would be published and gave it no official title, and this is the most common of several titles it has – and comprise quotations varying in length from one sentence (“Remember that all is opinion”, Book II) to longish paragraphs.

But, at this point, it will be worthwhile to examine what Stoic philosophy was about.

Originating in 3rd century BC Athens, it is one which has survived as a word (“stoicism”) whose meaning conveys its basic essence of carefully-controlled emotions and indifference to fate. But it also involved the realisation that virtue is the highest good and is based on knowledge and the wise live in harmony with the divine Reason governing nature, and are indifferent equally to both pleasure and pain.

Take a few examples of Marcus Aurelius’ thoughts – “If thou art pained by any external thing, it is not this that disturbs thee, but thy own judgment about it. And it is in thy power to wipe out this judgment now”, “A cucumber is bitter. Throw it away. There are briars in the road. Turn aside from them. This is enough. Do not add, ‘And why were such things made in the world?’ ” or even “There is a limit to the time assigned you, and if you don’t use it to free yourself it will be gone and never return.”

This sort of self-introspection and quest for a meaningful and responsible life was well suited for the Ancient Romans, but why has it continued to exert influence down the ages – right from when “The Meditations” were first published as a book in the mid-16th century right down to our less-reflective and more hedonistic age.

Leave alone the simplicity of the writing – philosophy, at its most basic, is meant to be a guide and record of life and the human condition, but turns out mostly to be impenetrable with its own jargon; there are many more reasons why Marcus Aurelius continues to speak to us – and with relevance.

British author Frank McLynn, who in “Marcus Aurelius: Warrior, Philosopher, Emperor” (2010) has sought to provide a comprehensive account of all his attributes, cites five. These include that he “satisifies the thirst for philosophical guidance which ancient philosophers thought they had a duty to perform but which their modern counterparts have largely abandoned”, and “his feeling for Nature which comes close to (poet William) Wordsworth”.

Then there is his affinity with the thought of the Orient, especially Hindu scriptures like the “Upanishads” which also “stress the inferiority of pleasure to the ‘good’, the desirability of self-knowledge and the holistic interpretation of all things in the universe…” “Different is the good and different is the dear,/they both, having different aims, fetter you men;/He, who chooses for himself the good, comes to wellbeing,/he, who chooses the dear, loses the goal,” as Yama tells Nachiketa in “Katho Upanishad” may well be our emperor instructing himself.

Then right conduct and duty without thought of result or reward correspond well to Buddhism and the Gita respectively.

Thus it may be understandable why Clinton turned to “The Meditations”, why Steinbeck referred extensively to in “East of Eden” and why Chatterjee’s IAS trainee Agastya Sen (in “English, August : An Indian story”) read it in his training. Freely available including online, you can also dip in it – the results might be worthwhile. (IANS)