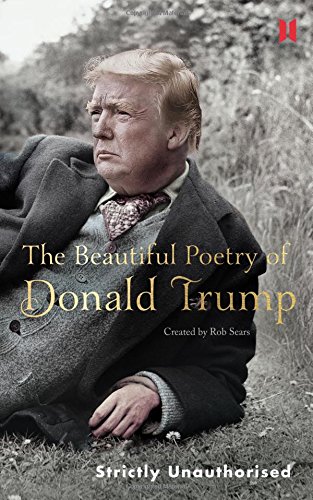 What can we make of Donald Trump? While history will be the ultimate judge of his presidency, despite all the ominous signs, attempts to be articulate, and gaffes so far, he may claim (with some unsolicited help) to challenge illustrious predecessors — eloquent Abraham Lincoln, highly articulate John F. Kennedy and restless polymath Theodore Roosevelt — on the literary level.

Forget Trump’s ceaseless exhibitions of misogyny and xenophobia or complaints of victimisation and targeting by most media, his crude, personal attacks on opponents or critics, the inexplicable coinages (“covfefe”), for there is a “sensitive, poetic side” to this President of the United States as expressed in his words over the years. Especially in his bid to win the White House, his victory and his tenure.

Trump himself may never have realised this ability nor would have we — but now we know.

“It is a little known alternative fact that the 45th President, Donald J. Trump, is a remarkable poet. This book aims to redress this oversight on the part of the literary world, and showcase his finest and most revealing words in a previously unknown form.

“While discoursing on politics, walls, gender issues or his own excellent genes, Trump’s poems are nothing if not beautiful. Terrific, in fact. Amazing…” says Rob Sears, who has compiled five dozen-odd of his “poems”.

Wonder why this Trump skill was not known so far? Well, for one, these are not conscious poems by Trump, but a deft repackaging of his tweets, public statements, his reality show dialogues, and sentences from his correspondence to make poetry.

Take “All I Ask is Fairness”: “People are constantly attacking my hair/I think it’s very unfair/Obama said he never met his uncle, Oscar/Imagine if I made that statement/It would be the electric chair”.

Or “I am the best”, which goes: “I predicted Apple’s stock would fall/I will build a great, great wall/I build buildings that are 94 stories tall/My hands – are they small?” and then “Slowly the hair dries” – which has just one line: “It’s a process that can take 18 months to two years”.

Behind this uproarious but revealing venture is Sears, a writer of fiction and comedy for American not-for-profit publishing concern McSweeney and Amazon’s Audible, who very tongue-in-cheek contends that they “reveal a sensitive and shyly artistic side to Trump that may prompt a reappraisal of the man even among his critics”.

Relying on the Trump Twitter Archive, the Trump Archive and American Presidency Project to collect tweets, including those long-deleted, and quotes, also from the pre-internet era, Sears has fashioned a remarkable range of verse detailing Trump’s views on various issues — more trenchantly, on his opponents in the race for the presidency.

And he uses a variety of styles, be it the sonnet, the quatrain (as shown above), the couplet (as in “I am open-minded” which goes “I use both iPhone and Samsung/A great leader has to be flexible”) and even the haiku for the purpose.

But the slightly longer ones, dealing with his pet peeves (“Very dishonest media”), stand out on their own, and show both Trump’s mindset and Sears’ creativity and expansive efforts. Take “I make this promise” — which starts with his presidential oath, then a 2015 tweet mocking John Kerry, a 1999 remark on Larry King Live, a 2012 attack on Cher, and ends with his closing words at a 2015 rally in South Carolina.

Sears, who identifies the origins of the remarks — tweets, speeches, etc on a facing page, also contributes a foreword that is not only a masterly exposition of Trump’s “poetic skills” but of his psyche — and the epitome of satire.

This is not the first work to use poetry to lampoon Trump, but among the best to use his own words for the purpose. And where reason crumbles before resentment, ridicule may be the only hope. (IANS)