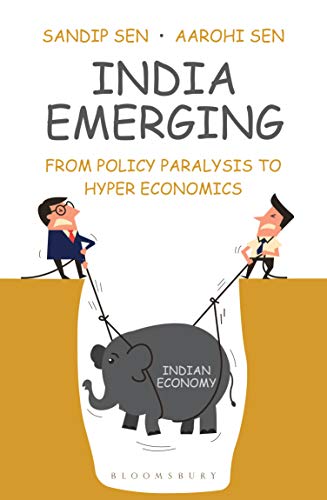 New Delhi– India is a nation with a huge demand but one that lacks high quality services. Be it agriculture, manufacturing or other services, the Indian economy is still a work in progress and its political leadership, its bureaucracy, its business class and its citizens are on a learning curve, searching for ways to get it right, says a new book that points to the five major risks that India must address in the coming decade to stay ahead.

These five areas “need to be closely watched because we will soon achieve the second level of disruptive innovation”, entrepreneur-turned-author Sandip Sen writes in “India Emerging – From Policy Paralysis to Hyper Economics” (Bloomsbury/pp 277/Rs 499) that examines the first term of the Narendra Modi government.

While the Indian economy has managed to perform moderately in the past two decades and make reasonable progress, it has fallen behind South Korea, China and Indonesia where both the per capita income of its citizens and ease of living have leapfrogged.

“The next decade would be game changing when India could either catch up with its peers or languish further behind, because it will be the decade of disruptive changes when the winner takes all, writes Sen in his second book after “Neta, Babu and Subsidy: Economic Roundup 2000 to 2014” on the two terms of the Manmohan Singh government. The author’s son, Aarohi Sen, has contributed to the present work through graphics and other inputs.

What then are the five major risks India has to contend with, given that disruptive changes have slowly helped the winners take all in the corporate world since the turn of the century?

* Energy, like data, will disrupt every industry but also bring unlimited opportunities

“This is because two energy deficient nations, China and India, are increasingly generating and using solar power. Today solar and wind power at below Rs 3 per Kilowatt-hour are competing at par with thermal power generated by coal. If prices fall to below Rs 1 per unit which should happen in the next few years it would become disruptive. It will cause millions of energy dependent businesses and gadgets to change the way they do business,” the book says.

The dual disruptions in technology and energy industry will initiate trade wars for global supremacy and usher in opportunities and challenges faster than we could ever anticipate, it says.

While climate change poses major challenges, it will create enormous opportunities for new business and economy. Replacing fossil fuels is a billion dollar opportunity. Managing water scarcity and water quality, air pollution, solid waste, natural disasters and outbreak of diseases are the major identified challenges. But unique innovative solutions exist today that if rightly adopted can not only meet these environmental challenges but give birth to new businesses and huge employment opportunities, the book contends.

Quoting from the reports of three audit majors namely PWC, E&Y and McKinsey the book points to the phenomenal increase of cyber crimes in economies that have already moved towards digitisation.

“While cyber criminals are working round the clock to breach secure systems to gain from financial frauds, ‘hackactivits’- politically driven hacker activists pierce online firewalls, to make political statements. Talking to 200 CXO’s all over the globe, the McKinsey report had predicted that attackers will continue to increase their lead over corporate defences,” the book notes.

“With increased technology comes the risk of human obsolescence. With the advent of automation, robotics and AI, the prime questions that come to everyone’s mind is what will happen to the jobs currently done by humans? Will humans become obsolete and redundant as labour intensive and skill oriented work gets increasingly done by machines both efficiently and at a lower cost? Should we race towards machine learning and digitisation before looking at basic computerisation and retraining the masses? This is a key question that populous nations like India must grapple with now, before it becomes too late,” the book says.

* Finance beyond regulation could challenge the authority of states

“The advent of cryptocurrencies will incresingly be a challenge to governments and regulatory bdies. So far it is largely controlled and used by techies who created them. But, as the world of high finance understands and adopts it in the global commodity markets, its use will spread. And with that will be created new and alternate channels of completely unregulated monetary transactions. This is not a risk for India alone but also for the rest of the world,” the book contends.