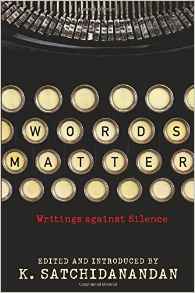 It is a theme that runs through the book, a collection of essays by scholars, artists, activists, journalists, writers, intellectuals, a former judge and a former diplomat. The idea of the book followed the protests of 2015 when several writers, artists, scholars and scientists returned their awards or quit their posts in government institutions to oppose what they said was rising intolerance in India backed by administrative inaction.

It is this intolerance of the “other” that led to three murders that shook the literary fraternity. All three killings were blamed on the Hindu rightwing. The first victim was Narendra Dabholkar, a renowned rationalist who was shot dead by two men on a motorcycle in Pune in August 2013. Then, in a similar fashion, two riders on a motorcycle shot dead lawyer, writer and Communist leader Govind Pansare in Kolhapur on February 16, 2015. Six months later, on August 30, leading Kannada scholar M.M. Kalburgi was killed.

For Satchidanandan, political Hindutva finds the diversity of India an unwelcome and disturbing presence. In his homage to Dabholkar, Dileep Chavan dubs claims that our culture is tolerant “nothing but a willing suspension of reality”. Hindutva, Ananya Vajpeyi points out, wants to ‘Semitize’ Hinduism; but Hindu nationalism has so far failed to decisively transform the mindset of most Indians.

Meera Nanda warns against Hindu nationalists who fabricate “a heritage we are supposed to kneel before in awe”, forgetting that like every other civilization, “we were givers and we were takers, with no monopoly in giving”. Pankaj Mishra accuses corporate houses of heading towards “a Berlusconi-style domination of news and delivery mechanism” amid the assaults on the “authorized idea of India”. No wonder, someone remarked that cows were safer in today’s India than Muslims.

Secularism, Romila Thapar says, is not a matter of choice; there can be no democracy minus secularism. And she warns that killings to silence people with a secular bent of mind can never succeed – “it merely leads to the suffusion of terror that will one day rebound on those terrorizing others”. In Salil Tripathi’s view, ministerial blunder and prime ministerial silence were making intolerance and hatred acceptable norms. Former Foreign Secretary Shyam Saran too finds the atmosphere disturbing. Urging Indians to regain the space for liberal values he feels has been encroached upon, the diplomat says: “If we value the idea of India, we must not only Make in India but defend the idea of India too.”