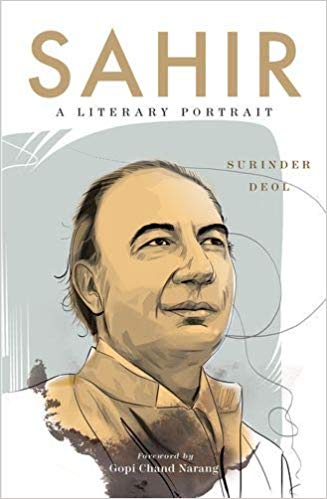 October 25 is the 30th death anniversary of Sahir Ludhianvi. Presented below is an exclusive extract from the book, “Sahir – A Literary Portrait”, by Surinder Deol

Sahir passed away nearly forty years ago, but time has not diminished interest in his personality, his poetry, and his ‘love affairs’, as observed in social media, and there’s an enduring public interest in his film lyrics. What is behind this undying attraction for him and his work?

What is that unstoppable magic that draws us time and again to Sahir’s poems and melodies? His book Talkhiyaan has appeared in dozens of Urdu and Hindi editions (both legal and pirated), and it is by far the largest-selling Urdu poetry book after Divan-e Ghalib. Compilations of his poetry have sold more than the books written by his progressive contemporaries like Majrooh, Majaz, Kaifi, Akhtar, and Jafri combined. What is behind this popular appeal that shows no sign of letting up? There are no easy answers.

I think there is the magic of Sahir’s enigmatic personality. The choices he made in his life were far removed from the routine. He was a recluse, living alone in a big bungalow without any thought of starting his own family. His concept of family – he himself, his mother, and his two cousin sisters – was limiting. What would happen

to his legacy when this family of four passed away? He never paid any attention to this.

He wrote highly appealing poetry that was deeply romantic, but it also had strong social, cultural, and political undertones. History has not been kind to progressives: The Soviet Union collapsed. China, once a bastion of communism, has become a one-party capitalistic state while nursing dreams of global domination. Nehruvian socialism in India has seen several dilutions through market-oriented reforms. Yet, hope for an equitable society still resonates. There is a powerful message in Sahir’s poetry against the inequalities of wealth, maltreatment of women, exploitation of labour, and the threat of a more deadly nuclear war that still holds appeal, and his words give vivid expression to these injustices and fears in a most compelling poetic language. India’s richest 1 per cent, according to an Oxfam report (2017), own 73 per cent of wealth. The position of women has improved over the past seventy years, but there’s a huge scope for improvement. Child marriage is common, and access to education by young girls is limited. Incidents of rape and sexual assault are on the rise. In 2007, the Ministry of Women and Child Development reported the presence of over 3 million female sex workers in India, with about 36 per cent entering the trade before the age of eighteen. These statistics show the difficult task inherent in raising the status of women to be at par with men, something that all progressive poets strongly advocated. On the threat of a nuclear war, there are not only bad state actors

globally who might use nuclear bombs to advance their interests, but regionally, India and Pakistan have the nuclear potential to completely destroy the whole subcontinent in case of a new armed conflict.

Although some people assert that Sahir separated himself from the literary world after he had achieved success as a film lyricist, he never agreed with this assessment. He treated literary pursuit as the core purpose of his life’s journey. Every poem or ghazal that he wrote mirrored some facet of his own life. It was a tapestry into which he wove the fabric of his aspirations, his successes and his failures, and the bitter and sweet lessons of his life; there is no way to separate his biography from his poetry.

Sahir’s words often paint a gloomy picture of the world we live in, but we should not lose sight of his optimism. Although all progressive poets were optimistic in the sense that the revolution they expected to occur was supposed to be the natural cure for society’s social and economic problems, Sahir, not being a member of the Communist Party, expected things to improve through social and political action outside the scope of a grand socialist revolution. For him, the day of a better tomorrow was not simply guesswork. It had to happen because people have the potential to create a better future for themselves. And this is something they are passionate about doing. Notice the words of a popular lyric from the 1958 movie Phir Subha Hogi:

That dawn will come one day-

when the veil of night will be lifted

from the dark times we live in.

When the clouds of suffering will dissolve

and an ocean of joyfulness will rise up.

When the sky will dance unchained

and the earth will sing wildly.

That dawn will come one day.

Waiting for that dawn since the beginning,

we have been living and dying.

In search of the nectar of that dawn,

we have been swallowing cups of poison.

That dawn will someday show mercy

to these hungry and thirsty souls.

Th at dawn will come one day.

A poet who consciously chose to call himself Sahir – meaning a magician or a wizard – needs an aura of mystery; without this veil of the unknown and unexpected, his magic will cease to have any appeal. Sahir’s work is a feast in every sense of the word and, as someone who has enjoyed his poetry over the past several decades, I would say that there is great joy in this onslaught of lyrical thoughts and romantic overtures that his poetry offers.

The 20th century produced many outstanding Urdu poets, both modern and postmodern in their thinking, who rescued the ghazal from the fascinating, though totally unrealistic, themes of the previous centuries, and through their poems and ghazals brought new life to a poetic tradition that was losing its touch with reality. The relevant question is not whether Sahir was better than Faiz, Makhdoom, Majaz, Majrooh, Kaifi, or Jafri. They had much in common, but at the same time, each one of them had a distinctive style. Perhaps Faiz was the greatest of them all. But that does not minimize Sahir’s importance. He is a poet of life who is in love with it despite all its bitterness and unpleasantness. Above all, he is a poet of peace, with concerns for the well-being of humanity. In a short poem titled ‘I Love Life,’ he wrote:

I can’t separate myself

The fire of passionate love

burns in my heartbeat even today.

And my heart is not doused yet.

Into the tapestry of life,

the fate of the universe,

and my personal suffering

come to an end.

The sacred word is dear to me.

Even today, my compact with the new age

is something that I shall keep.

I haven’t died yet.

(Surinder Deol, who has held senior positions with the World Bank, IDBI and MDI, has translated Ghalib’s verses in “The Treasure: A Modern Rendition of Ghalib’s Lyrical Love Poetry” and Gopi Chand Narang’s classic Treatise on Ghalib as “Ghalib: Innovative Meanings and the Ingenious Mind”. He lives in Potomac, Maryland. Published with permission from Oxford University Press)