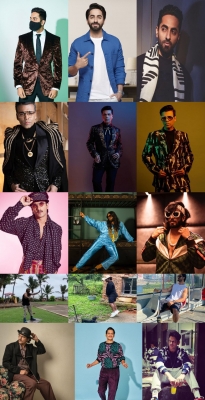 New Delhi– Late legendary actor Dev Anand set male accessories aflame with silk scarves and rakish berets but down the line, men in Hindi cinema have outgunned the Bollywood heartthrobs with louder wardrobes of their own.

The fever rapidly travelled from actors to directors, producers to playback artistes as the red carpet citizenry scrambled to get noticed in spiffy ensembles that men with weak hearts may dare not wear.

Here are some of the contemporary fashion-makers:

Bollywood’s very own livewire Ranveer Singh pushed the bar up the moment he hit stardom in 2010 with ‘Band Baaja Baaraat’. He went loud to demolish mental barriers on the male wardrobe in tinsel world. His fashion style can be described as eclectic and even “hatke”. The 36-year-old has turned heads by sporting a black skirt, a ghagra Pathani combo or refreshing the disco look and even neon-lighting his gush for A-ticket labels by dressing up top-to-toe in Gucci accessories.

The ‘Gully Boy’ star even professed his love for the brand on Instagram by saying: “Find your Chi, they said. So I did #gucci.”

Just like his films, the movie-maker too depends on outfits so glamorous that takes the breath away of industry plebeians. The 49-year-old Johar is comfortable in jarring colours, glittery jackets, resplendent prints, iridescent shoes or chunky glasses. He took his style quotient up by a notch when he was seen during the very first episode of ‘Bigg Boss OTT’, where he sported a leopard print jacket, a black T-Shirt, massive reading glasses and a silver chain around the neck.

He even went on to say that if he was one of the contestants, he would “always be overdressed, even while sleeping, and remain in the headlines”.

Just like his realistic work in cinema, Ayushmann’s approach to fashion is also the same. It’s elegant, realistic, classic and also comfortable. Anyone can relate to his style that is what makes it appealing. From wearing cool denims to bespoke suits — Ayushmann has always held up his almost down to earth style.

He has added dollops of glamour to retro fashion and gave a touch of himself to his street-style ensembles. Anyone following Vijay on Instagram knows his fetish for sneakers. The ‘Bamfaad’ actor can rock in anything from joggers, casual denims to chic tuxedos and suits. The actor has opened up about being a sucker for 90s fashion. He said during a question-answer session on his Instagram: “I’m a sucker for all things retro — nineties fashion for their loose wide baggy fits and crazy prints.”

Many would be surprised but yes, Vidyut makes his own fashion statements and it is even followed by his army of fans, whom he fondly calls Jammwalions. ‘Macho’ is his style because the actor, who is also a fitness enthusiast, dotes cargo pants, joggers, shorts and vests apart from what a regular actor would pack in his travel bag. Sometimes he even treats his fans with a shirtless picture to give a glimpse of his well sculpted beefy body.(IANS)