The show, which brings to life the grandeur and extravaganza of Bollywood, dance, music and theater with a special lighting effects that brings the magic of Bollywood in a live performance, is produced by UFI Events and directed by Rohit Baxi. The whole production is based on a true story.

Bollywood A-listers, Malaika Arora, Tamannaah Bhatia and choreographer, dancer and film director Remo D’Souza will be performing along with an amazing crew of 150 trained dancers, with over 2,000 costumes and special light effects.

“The synergy on stage is amazing, colorful and a must see for every dance, music and theater enthusiast. The theater production features original choreography alongside some of the most popular dance numbers,” organizers said in a statement. “RRang is a unique story that combines dance, theater and music with a story to be told. It is a large scale production that brings in mysticism, vibrancy and the magic of old and new India.”

The statement said that RRang is a mix of Diversity, Culture and Ethnicity.

“It will weave tradition with modernity, light with dark, ancient India with modern India. Colorful costumes and elaborate sets create unforgettable night of explosion and energy,” the statement said.

Malaika Arora is an Indian actress, dancer, model, VJ, and television presenter. She is most famous for her dancing in the songs Chaiyya Chaiyya (1998), Gur Naalo Ishq Mitha (1998), Maahi Ve (2002), Kaal Dhamaal (2005) and Munni Badnaam Hui (2010). Arora was selected as one of the VJs when MTV India started its operations. She began working as an interviewer, hosted shows such as Club MTV, and later co-hosted with Cyrus Broacha the shows Love Line and Style Check. Malaika then entered the modelling world, appearing in many advertisements, for album songs like Bally Sagoo’s “Gur Naalo Ishq Mitha” opposite Jas Arora and item numbers such as “Chaiyya Chaiyya” in the 1998 Bollywood film Dil Se…

Remo D’Souza is an Indian dancer, choreographer, actor and film director. D’Souza was a judge in the show Dance India Dance (DID) with Terence Lewis and Geeta Kapoor , Jhalak Dikhhla Jaa with the Indian actress Madhuri Dixit and director Karan Johar. He was the “super judge” on the prime time dance show Dance Plus, on Star Plus, along with team captains Dharmesh Yelande, Shakti Mohan, and Punit Pathak. His first movie as a director, F.A.L.T.U, was a moderate success at the box office. He made India’s first 3D dance movie, ABCD – AnyBody Can Dance, with contestants from season 1 and season 2 of Dance India Dance (Dharmesh Yelande, Punit Pathak, Salman Yusuff Khan, Raghav Juyal, Prince and others), Prabhu Deva and Lauren Gottlieb. His next directorial venture, ABCD 2, was released in June 2015. It starred Varun Dhawan, Shraddha Kapoor, and Prabhu Deva in lead roles, with Lauren Gottlieb, Punit Pathak, Raghav Juyal, and Dharmesh Yelande in supporting roles. 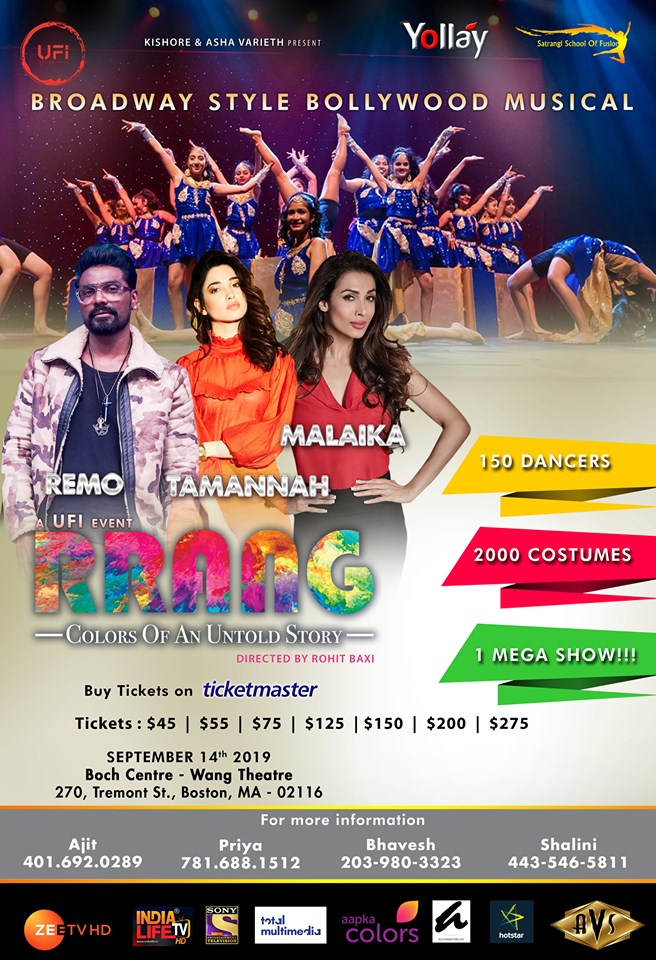 The show in Boston is brought by Yollay, which has partnered with UFI Events.