Zoya Afroz: Playing a con artiste is like entering a new world

Mumbai– Actress Zoya Afroz says playing a con artiste in a show like ‘Matsya Kaand’ where the world of the story is driven by the male characters, was quite fascinating.

Zoya told IANS: “Even though it is the story of Matsya and Ravii (Dubey) is playing the title role, and appearing in 11 characters, every character in the narrative is playing an important part. Initially, when I heard the brief of the story I thought it is a male dominated world but eventually, I realised that my character is very well-edged out.

“I am playing a con artiste and a magician here in the show. It is like I am entering a new world through this character, which is so multi-layered. Perhaps that is why despite the story centered around one man, every actor’s contribution to the narrative is important.”

The show releases on November 18 on MX Player.

Mumbai– Bollywood’s power couple Deepika Padukone and Ranveer Singh have set the Internet ablaze with their lovey dovey pictures from their vacation.

The couple took to their Instagram handles and posted a series of aesthetically pleasing photographs set against the backdrop of serene locations.

Both Deepika and Ranveer posted a series of monochromatic photographs in two separate posts. While Deepika wrote, “All of my heart” in the first post, for her second post she simple put up the caption, “And then some (heart emoji).”

In the photographs, the two seem to be enjoying the winter season at an undisclosed location while exploring the beauty of nature around them.

Deepika has an interesting array of projects lined up. The actress will be seen alongside Amitabh Bachchan in the Hindi adaptation of ‘The Intern’. She will also be seen opposite Hrithik Roshan in ‘Fighter’ and in ‘Pathan’ where she will share the screen with Shah Rukh Khan.

Ranveer, who was recently seen in an extended cameo in the Akshay Kumar-starrer ‘Sooryavanshi’, will be headlining the Kabir Khan directorial ’83’ as Kapil Dev while Deepika plays his wife Romi Dev. His upcoming projects also include Dharma Productions’ ‘Takht’ and Rohit Shetty’s ‘Cirkus’.

Bhumi on ‘Govinda Naam Mera’ look: Love for sarees started with my journey in cinema

Mumbai– Actress Bhumi Pednekar has talked about her love for wearing sarees in films. She credits it to her journey in Hindi cinema.

Bhumi said: “I find it a big compliment if people find me pretty in a saree! I love wearing one whenever I get a chance and thankfully I have been able to wear quite a few of them in my movies! I’m glad people are loving another saree avatar of mine.”

She added: “My look in ‘Pati Patni Aur Woh’ (PPAW) got a lot of love, I am sure this one will too. Both the characters are extremely different and that’s exciting.”

The actress said that her “love for sarees started with my journey in cinema and more because my audience loves me in them.”

She said: “In PPAW, the response was overwhelming and after they have loved my look in ‘Govinda Naam Mera’, I have got convinced that sarees on me are loved by audiences and my fans.”

In ‘Govinda Naam Mera’, Bhumi has been paired opposite Vicky Kaushal. The film that releases on June 10, 2022, also stars Kiara Advani as the ‘naughty girlfriend’ of Vicky.

Mumbai– Actress Richa Chadha has wrapped up shooting for her upcoming series ‘Six Suspects’ and said that working with the likes of Pratik Gandhi, Tigmanshu Dhulia, Ashutosh Rana and Raghubir Yadav has been a wonderful journey.

Directed by the brilliant Dhulia, Richa plays an investigating officer in the series, which is a web-series adapted from Vikas Swarup’s 2016 novel ‘Six Suspects’.

Speaking about her experience, Richa said: “This character is amazing. She has a lot of dignity. She fights without being aggressive to get to the truth. She has a lot of compulsions, both at work and at home.”

She added: “Working with the likes of Pratik Gandhi, Tishoo bhai, Ashutosh Rana and Raghubir Yadav has been a wonderful journey. They’re all so good that I wonder if an understated and dignified character, like the one I play in this one will stand out. But that’s always good for the show.”

‘Six Suspects’ will be released on Disney+Hotstar.

Mumbai– Bollywood star Akshay Kumar has heaped praises on his co-actor Manushi Chhillar. He is excited to see how the “effortless” debutante makes a mark in the Hindi film industry. 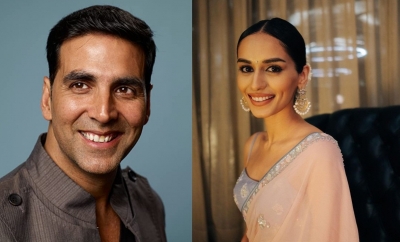 Akshay said: “Manushi is undoubtedly a talent to watch out for. Despite Prithviraj being her first film, she was so effortless, so inquisitive and so dedicated that she won the entire team’s heart.”

Manushi plays the role of his princess Sanyogita in the film.

He added: “Our director Dr. Chandraprakash Dwivedi has found the perfect Sanyogita because Manushi through her grace and her life values instilled by her parents, embodies the spirit of Indian women who are beautiful inside out.”

“I’m really excited to see how Manushi makes a mark in our Hindi film industry and I expect them to welcome her with open arms. I’m really proud to be introducing her as Princess Sanyogita.”

‘Prithviraj’ is based on the life and valour of the Samrat Prithviraj Chauhan. Akshay is essaying the role of the warrior who fought valiantly against the merciless invader Muhammad of Ghor.

Produced by Yash Raj Films, ‘Prithviraj’ is directed by Dr. Chandraprakash Dwivedi. It will be released worldwide on January 21, 2022. (IANS)